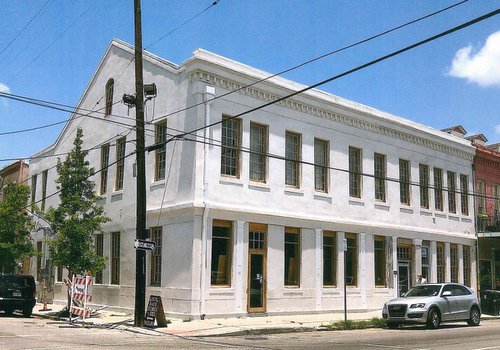 The building at 1837 Magazine Street used to be the home of Jim Russell Rare Records. (via city of New Orleans)

Union Ramen, a new restaurant planned by a founding partner of the Eiffel Society, recently held its first meeting with Lower Garden District neighbors as it seeks the city’s permission to open in the Magazine Street building that formerly held Jim Russell Rare Records.

Union Ramen is the creation of Jeff and Cat Gapultos, working with Chef Nate Nguyen, and will be in a two-story, 4,000 square foot space at 1837 Magazine. Even while planning the new location, they have continued their regular pop-up appearances, most recently at Urban South Brewery in April and Seven Three Distillery in May.

“Starting out as a pop-up at various locations in the city, Union Ramen has developed a strong following with their interpretation of ramen for the New Orleans palette,” Gapultos writes on his LinkedIn page. “Their goal is to open up a restaurant to unite their passion for their amazing menu with the rest of the world.”

The restaurant needs a conditional-use permit from the city — which includes alcohol sales — in order to open on Magazine Street, so the owners held their required Neighborhood Participation Plan meeting May 21. Addressing some of the neighbors’ concerns, the owners said they were looking into the possibility of valet parking, although services such as Lyft and Uber have reduced parking needs.

Some neighbors were also concerned about permanently adding alcohol sales to the building, in the event that the restaurant does not remain at the location.

“We are very concerned about these unanswered questions and others and reiterate our opposition the concern and our opposition to the liquor license being for the building, and not for your specific business,” nearby neighbor Donald Maginnis wrote in a letter a week after the meeting.

The Lower Garden District Association voted in favor of supporting the restaurant, however, as long as it signs a good-neighbor agreement governing its operations.

The restaurant’s appearance before the City Planning Commission is currently scheduled for July 24.