The new master plan for Audubon Park received its final, unanimous approval from the Audubon Commission on Tuesday night in spite of a show of opposition from the public — not for anything contained in the plan, but for its exclusion from discussion of the golf course or the park’s financial future.

The plan contains “no substantive changes” from the draft presented to the public in May, said Mark Ripple, of the Eskew+Dumez+Ripple firm that led the planning process. It did contain some minor adjustments, however, particularly the inclusion of some of the emphatic language the National Association of Olmsted Parks sent in a letter about Audubon’s master plan in May, Ripple said.

One universal goal of Olmsted-designed urban parks is to provide democratic space available to everyone and permanently protected from private appropriation and non-park use, the Olmsted association wrote to Audubon. Will this overarching purpose for Audubon Park survive if more facilities are added and ever less green space remains accessible and free?

“This is not a rhetorical question,” Ripple said. “This is central to us as planners.”

Overall, the plan’s central tenet is that the current balance between active, organized recreation and passive open areas should be maintained, with no new development to infringe on green space. Instead of new construction, attention should be given to maintaining the current amenities and improving the infrastructure — such as lighting, tree protection and drainage — where current deficiencies have been identified. 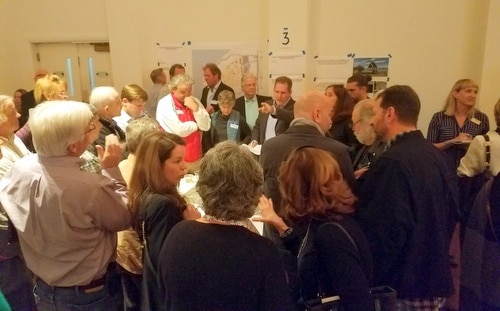 The plan does offer some specific recommendations for improvement. To alleviate traffic, for example, the plan considers a number of options to change the flow of vehicles through The Fly, such as making Riverview Drive two-way. It calls for better pedestrian and bicycle paths as well, and urges the Audubon Commission to pursue expanding the Riverview area upriver if possible through acquisition of adjacent property.

Two subjects were deemed complex enough to require additional public input sessions on their own. The shuttered Shelter 13 near Magazine Street — recently named one of the city’s most endangered historical sites by the Louisiana Landmarks Society — should be studied for reuse with public input, according to the plan. Improvements to the tennis courts also received ardent advocacy, but the Audubon Commission should convene meetings with tennis groups and neighbors to determine the impact of more lighting, later hours or other improvements to the courts, the plan recommends.

After Ripple’s presentation of the plan concluded, 10 people from the audience spoke — mostly criticizing the plan for its stated exclusion of the Audubon Zoo and golf course from any consideration of the plan, or for a lack of discussion of the park’s finances.

Holly Breaux, a nearby resident, said she was frustrated this past weekend to see the area around one fountain rented out to a film crew, while the meditation labyrinth was surrounded by a spacewalk and balloons. Even though her children participate in the Carrollton Boosters athletic programs, she said she is concerned about how much of the park is under control by private groups.

“I believe the park should be for everyone, and we should all be able to use it to unwind,” Breaux said.

Howell said the plan’s lack of information about funding will harm Audubon’s credibility with the public when it comes time for two Audubon-related property taxes need to be renewed in 2020 and 2021.

“It’s a lovely looking plan, but it has glaring omissions and they need to be fixed,” Howell said.

Audubon Nature Institute CEO Ron Forman replied that the commission receives financial updates at each of its public quarterly meetings — including later in Wednesday’s meeting. Meanwhile, the park itself is not supported by the property taxes.

Following Forman’s comments, the commission voted unanimously to accept the new master plan. Forman said after the meeting that Audubon staff have already begun discussions about how to implement the plan’s specific recommendations, and are considering a specific fundraising campaign around them.