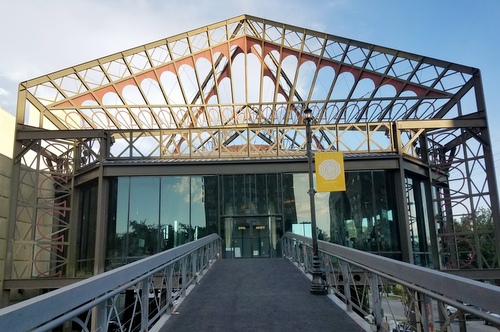 The Eiffel Society on St. Charles Avenue is seeking a change in use from a reception hall to a bar. (Robert Morris, UptownMessenger.com)

The Eiffel Society wants to change its use from an event space to a bar, allowing it to charge a cover for patrons that the owner says he will invest into more improvements to the building, but neighbors already tired of late night parties at the St. Charles Avenue building say they are wary of granting any additional permissions there.

Roger Ivens, who has owned the Eiffel Society since 2010, said the building is currently classified as an “reception hall” with an additional permission for live music, and that he would like to change its conditional use to a bar with the live music attachment. Currently, the Eiffel Society primarily hosts events from other operators, who sometimes charge a cover, and the change in use would allow him to charge a cover at the door for tourists and others who stop in when no event is operating, Ivens said at a neighborhood meeting on Monday.

With the additional revenue from those cover charges, Ivens said he could install more elaborate soundproofing and take other measures to improve quality of life for neighbors who sometimes complain of loud music emanating from the building and large, unruly crowds outside.

Dozens of neighbors showed up for the meeting, and those who spoke were largely expressing concern about the Eiffel Society’s past and present impact on their homes. Many said they could hear the music from the Eiffel Society well into the morning hours, and said the large crowds that gather around the building during events are loud and disrespectful to the neighborhood, drive and park dangerously, litter with abandon and sometimes harass residents who are merely walking home.

“At 2 in the morning, it’s banging the windows. Your light show goes through my shutters,” Webber said. “I’m a fan of the building and a fan of entrepreneurship, so I’m not here to attack you, but it’s not good.”

Alvin Gentry, who lives nearby, said he faces some sort of problem in his yard every time the Eiffel Society hosts an event, particularly the behavior of young patrons who spill outside into the neighborhood.

The Rev. Robert Belknap, pastor of Zion Lutheran Church on the next block of St. Charles Avenue, said he had a slightly different problem. The sound systems in the Eiffel Society and the nearby church sometimes use similar frequencies, resulting in the sound from Eiffel Society DJs bleeding into the church’s system when both have events at the same time.

“Do you know how many F-bombs we’ve heard in the middle of a wedding?” Belknap said. 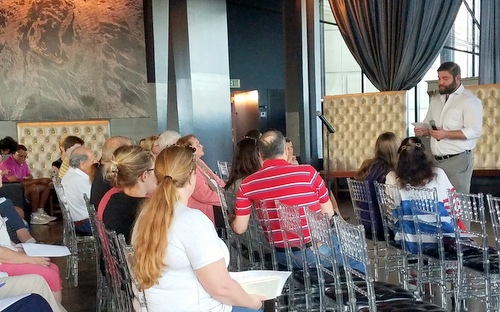 Ivens said that he is sensitive to those concerns, and has already changed the building’s sound system to reduce the bass sound that is most disruptive outside the building. In addition to the planned soundproofing improvements, he pledged to hire private security guards to control the crowds outside for any event that draws more than 150 people. His staff cleans up all litter on the property at the conclusion of every event, he said, and he will begin branding any other disposal cups or other items so that his staff and residents will know whether the trash they see elsewhere is from the Eiffel Society.

Ivens’ promises did little to calm the frustrations of the residents, however. Lower Garden District Association president Ryan Kropog urged Ivens to begin implementing the changes immediately, and to slow his application process until residents can begin to see a difference.

Martin Manion, president of the Prytania Street rowhouses, said that he agreed Ivens should begin working on the solutions before asking for the change in use. Until then, he said, weary neighbors are going to have a hard time believing that the Eiffel Society can contain its impact.

“This is a raised glass and steel building,” Manion said. “It is totally unsuitable for live entertainment.”

Ivens promised to join the Lower Garden District Association for their July meeting with more detail on his plans.