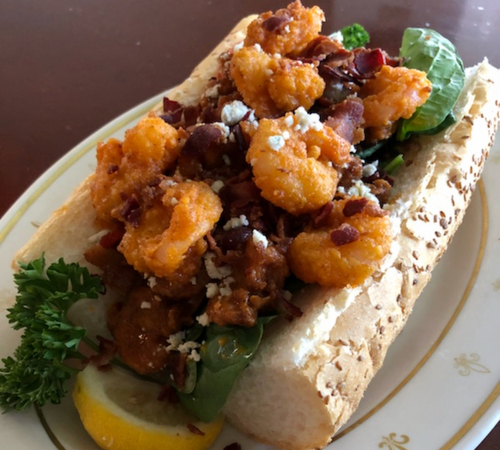 Cafe Reconcile is memorializing the recent losses of two of its benefactors, restaurateur Ella Brennan and food journalist Anthony Bourdain, with a new shrimp, bacon and blue cheese po-boy named jointly in their honor.

The “Brennan and Bourdain” or “B&B” po-boy dresses buffalo shrimp with bacon, crumbled blue cheese and tomato on Leidenheimer bread, and will be available through the month of June, Cafe Reconcile announced.

Cafe Reconcile recruits hundreds of young people who lack education or employment history and trains them in life skills and workforce development, while putting them in touch with social services to treat other issues such as homelessness at the same time.

Brennan and Bourdain both supported Cafe Reconcile’s mission financially, and by promoting it in other ways. Brennan hired dozens of Cafe Reconcile graduates to work for her at Commander’s Palace, while Bourdain visited the restaurant on several of his many trips to New Orleans, saying in a 2008 episode of “No Reservations” that “Café Reconcile is a second chance, a place where … anyone can remake themselves.”