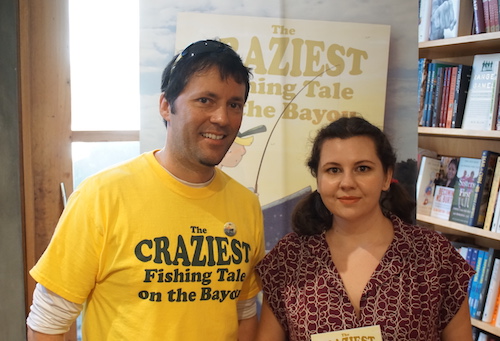 Author Gary Alipio (left) and Illustrator Sarah Gramelspacher at the release of “The Craziest Fishing Tale on the Bayou” (Tyree Worthy, UptownMessenger.com)

Hatcher Hampton is turning twelve. Per family tradition, he’ll be entering his first fishing rodeo, hoping to prove he’s better than his older brother. First prize wins $500—money that could save his family from being evicted from their home—and the winner gets his picture in the front page of the paper! But getting stuck in a horsefly-infested swamp with Grampa Grump and no extra underwear isn’t what he had in mind.

This is the premise of New Orleans Author Gary Alipio’s first published children’s book, “The Craziest Fishing Tale on the Bayou.” Alipio celebrated the release with a launch party, book reading and signing at Octavia Books on Saturday, March 3. 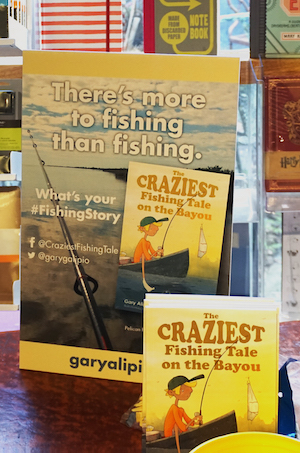 “The Craziest Fishing Tale on the Bayou” (Tyree Worthy, UptownMessenger.com)

Alipio chose the subject matter from his own experiences as a child. Fishing taught him a value at a young age, which sparked the idea for the book:

“My grandfather took me fishing when I was six or seven years old. I think the simplicity of throwing a fishing line out there and just sitting there watching… I think it [builds] patience,” he said. “It’s a value my grandfather instilled in me, and I’ve loved fishing ever since. I take my daughter out [now], and I don’t really care if we catch anything. We just go fishing.”

Alipio grew up a reluctant reader. With “The Craziest Fishing Tale on the Bayou,” he hopes to inspire children to read more by giving them fun stories that interest them.

“I was a reluctant reader when I was a kid. I couldn’t find books that I really wanted to read,” he said. “One of the bigger reasons I wrote this story was that these are the kind of things that I would’ve read. I know there are kids out there still who are reluctant readers–I have one, she’s nine years old.

“There’s something about putting a book in a kid’s hands (who’s a reluctant reader) and watching them go through something. Regardless, if it’s a graphic novel or a book with just words, or something that’s funny, or an adventure, I think kids want to see themselves in the books they read. I’m hoping this is one is going to reach a lot of people, basically through the love of fishing. 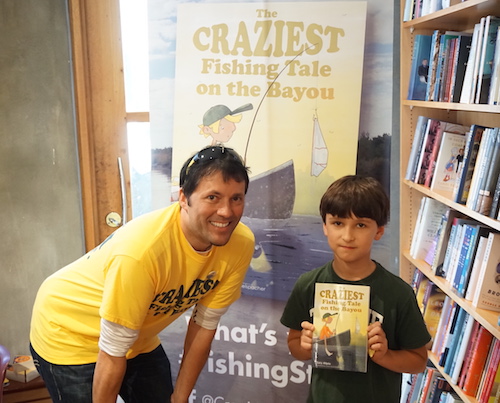 Author Gary Alipio and a young reader at the release of “The Craziest Fishing Tale on the Bayou” (Tyree Worthy, UptownMessenger.com)

Alipio was born and raised in New Orleans, with family in Lafitte, LA where they would go fishing. He lived elsewhere for about five years and returned to NOLA about two years before Hurricane Katrina. Seeing the aftermath of that, he took pride in living and staying in the city. In both New Orleans and Lafitte, Alipio says, “The culture is just celebrating the place we live, the place we love.” 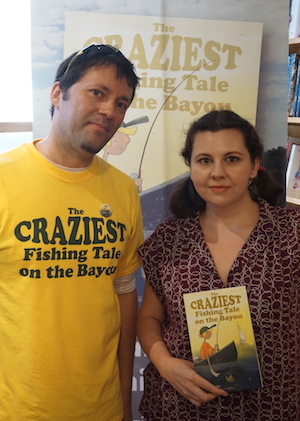 Author Gary Alipio (left) and Illustrator Sarah Gramelspacher at the release of “The Craziest Fishing Tale on the Bayou” (Tyree Worthy, UptownMessenger.com)

The book is 96 pages long, written for children 8 to 12 years old. Illustrator Sarah Gramelspacher spoke about her additions to the project and bringing Alipio’s words to life.

“I was honored that Gary chose me specifically to do this, because it’s normally up to the publishers to choose an illustrator for the cover,” Gramelspacher said. “After I agreed to do the cover, [Gary] said, ‘Oh, why don’t you do some interior illustrations too?’ That was very flattering.”

Regarding the crazy tale, Gramelspacher added: “It was a funny story, and I was glad to inject my humor into the cover.”

With his first published book, Gary Alipio hopes children—reluctant or not—read his work with one take main takeaway: “There’s more to fishing than fishing.”

“The Craziest Fishing Tale on the Bayou” is published by Pelican Publishing Company and available for purchase at garyalipio.com. Visit the site for reviews, book information, and more about the author.

“The Craziest Fishing Tale on the Bayou” cover (via garyalipio.com)