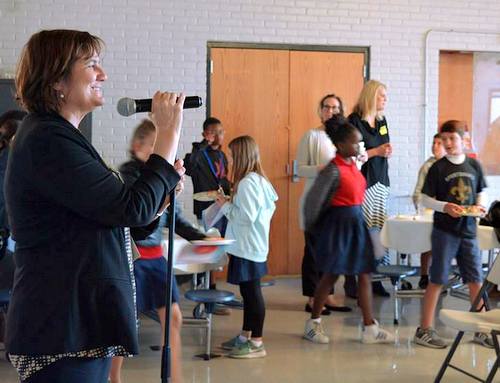 Lycee Francais academic director Marina Schoen speaks during a school event. She was chosen as the school’s new CEO on Thursday night. (photo via Lycee Francais on Facebook)

The governing board of Lycée Français de la Nouvelle-Orléans has chosen to elevate the school’s current academic director, Marina Schoen, as the school’s next chief executive officer.

The board deliberated for more than three hours Thursday night before making the decision. CEO Search committee chair Ben Castoriano praised Schoen’s work with the school over the past five years as he made the motion to offer her the job.

“The last five years have given me a lot of respect and optimism for all the things she with Lycee can do in the future, and the exciting times yet to come,” Castoriano said. “She has an amazing track record at the school.”

Prior to the executive session, board chair Michael Williams said that the board members had all met all the candidates, but had not exchanged their thoughts with one another prior to Thursday’s meeting.

“There’s been no discussion or debate on this as a group or individually,” Williams said. “I’ve asked everybody to themselves so that we can have an open and honest discussion about who the candidate is going to be.”

Williams also praised the CEO search committee for their diligence in creating a national search that was open to the entire Lycee community, and said he was impressed by all three finalists.

“All three candidates have gone above and beyond to show their want for the job, that they really believe they can take our school to the next level as the new CEO,” Williams said.

Dozens of parents attended the meeting, and many waited in the school’s cafeteria through the lengthy closed-door deliberations. Only a handful spoke about the candidates, and all of the comments were in favor of Schoen.

Melanie Ford, a parent of three children at Lycee, praised Schoen’s leadership on behalf of the school.

Sherrie Frazier, a parent at the school for two years, said her first choice for a CEO did not make the finalists, but that she had confidence in Schoen as a leader.

“That person that fills the shoes and exceeds would be Marina. She knows our kids and she loves them,” Frazier said. “She would be the one to really take this school to higher points.”

Parent Maggie Shelton praised both of the other candidates, but said Schoen had both of their best qualities as well as her institutional knowledge.

“Marina has the experience of this particular school,” Shelton said. “Marina all the way.” 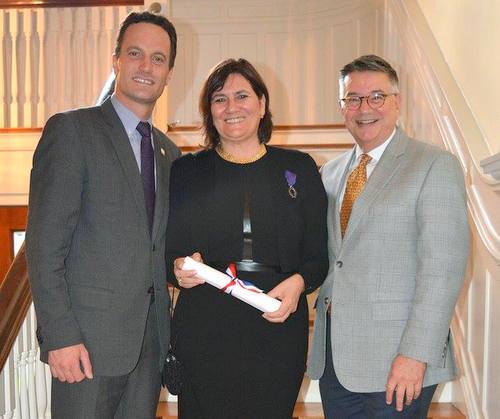 Lycee Francais academic director Marina Schoen poses for a photo with the French consul general and outgoing Lycee CEO Keith Bartlett after Schoen received a form of knighthood from the French government. (photo via Lycee Francais on Facebook)