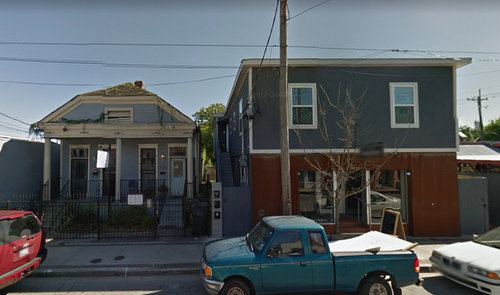 Freret Beer Annex is planned for 5012 Freret Street (on the far left), in the building next to Freret Beer Room at 5018 Freret. (via Google Maps)

The owner of the Freret Beer Room restaurant has received tentative approval to create the “Freret Beer Annex” packaged-liquor store next door, despite the objections of some nearby business owners.

Eli Gay opened the Freret Beer Room in November 2016 at 5018 Freret Street, pairing craft beers with a dinner menu in the building that housed Latrina’s bar prior to Hurricane Katrina. Now, Gay is proposing a new business, “Freret Beer Annex,” selling boutique beer, wine and spirits in half of the shotgun double next door at 5012 Freret.

“I want to bring to the Freret neighborhood something that is not offered — that of a selective, upscale liquor store for neighbors and residents to walk around the corner and buy a bottle of wine or something to take home for their dinner, and really be an asset to an already-thriving street,” Gay said to the City Planning Commission on Tuesday (May 22). “I’m already established as a restaurant owner. Indeed, any of the possible issues that can arise with liquor stores are issues that I as a already-present business owner on the street would be working to not allow to have happen in the first place.”

Retail sale of alcohol requires a conditional-use permit from the city, and the planning staff had recommended approval of Gay’s project as promoting the walkability of the neighborhood.

“The proposed use would complement the existing mix of restaurants, bars, galleries and other commercial uses currently found in the area,” the staff wrote.

The project, however, found opposition in the owners of two nearby businesses. Dat Dog owner Constantine Georges sent the planning commission a letter suggesting that the liquor bought in the store will be opened as soon as the customer walks outside.

“A package liquor store is almost a thing of the past,” Georges wrote. “Anyone wanting to purchase liquor, wine or beer can go to numerous venues in the Uptown area to accomplish this. Creating a venue that allows people to be able to buy something they can open up immediately is asking for problems of loitering and nefarious gatherings.”

Alba Sanabria, owner of Supermercado Acacias, said she thought some commissioners might remember the years of fighting she spent seeking the rights to alcohol sales at her corner store. Allowing restaurants to open their own liquor stores is a whole new “can of worms,” she said.

Two commissioners, however, took issue with Sanabria’s point, asking why Las Acacias should be allowed packaged liquor sales and not the Freret Beer Annex.

“I just find it very baffling that you’re now able to sell it, and you’re going to oppose this,” Hughes said. “You’ve given no compelling argument other than you’ve been put through bureaucracy and the ringer.”

“We don’t want to be accused of favoring one over the other,” agreed Commissioner Eugene Green.

Commissioner Lona Hankins, however, pointed out the distinction between a corner grocery store with other items alongside the alcohol, versus a store selling only liquor operated by a restaurant owner.

In rebuttal, Gay said he shared Georges’ concerns about people buying packaged liquor to drink it on the street, and said he would do all he can to prevent it. Regarding Las Acacias, Gay said his store will have at most “five products that overlap” her offerings.

Commissioner Kyle Wedberg pointed out that the conditional-use permit is for the property, not the specific Freret Beer Annex business, and thus should be decided solely on whether liquor sales are right for the location in the long-term. City planner Stephen Kroll agreed that the city is “not discriminating between what the first tenant can do and what the second tenant can do,” as long as the laws are followed.

With that, Hughes made a motion to approve the request. The commissioners voted 7-1 in favor of it, with only Hankins dissenting.

The recommendation will be sent to the City Council for a final decision.