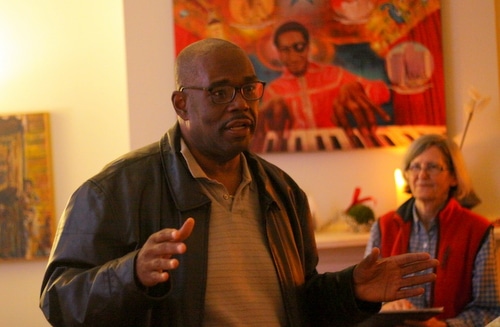 Several residents in the Faubourg Marengo neighborhood say they’ve had to deal with a tar-like odor around – and sometimes within – their homes for several years, and their new City Councilman says he will try to find the cause of the smell.

About 10 people from the small community between Magazine and Tchoupitoulas near Napoleon Avenue have banded together to examine the source of the reported foul odor. The group, unofficially led by Eric Eagan, met for the first time Wednesday evening.

“I have noticed the posts (on NextDoor) and noticed I’m not alone, so it’s time to stop sitting back and time to start doing something about it,” Eagan said. “My instinct is to go about this slowly and deliberately.”

The initial meeting allowed residents to discuss how often, at what times and how strongly they smell the noxious odor. Most of those at the meeting admitted to smelling burnt tires or burning gas while outside or traveling, and a few noted they’ve smelled it inside their homes. The odor is primarily coming from the direction of the river and strengthens on windy days, some residents said.

Sarah Hayne, who lives on Camp Street, said the burning scent leaves her feeling nauseous, causing headaches, a tight throat and difficulty swallowing on days when the odor is strong. She has to leave her doors and windows closed in fear of the scent seeping into her home and causing even more headaches.

Faubourg Marengo backs up against the river and the scent of tugboat fumes and leaking fuel occasionally seep into the area.

This noxious odor, however, is different, neighbors said.

“I’ve lived there for 16 years, and it hasn’t always been this way,” said Camille Terk, who lives on Annunciation.

While the cause of the odor is unknown, residents can report odd smells to the Louisiana Department of Environmental Quality, which regulates environmental controls and protections. Corinne Van Dalen, an environmental attorney, told the Faubourg Marengo residents to keep track of every incident of the smell and the conditions surrounding it, such as rain, wind direction and temperature. Establishing detailed, consistent records gives residents a better chance of finding solutions to curtail the scent, Van Dalen said.

Citizens can file environmental complaints incidents online by clicking here or calling 1-866-896-LDEG (5334). Van Dalen encourages people call every time the odor is present, and to keep their own records (in a calendar or in a text thread) to corroborate what the DEQ has on hand.

Michelle Hall, another environmental lawyer, said that while the exact cause is unknown, there are a few other possible solutions in the future. Once they identify whatever – or whoever – is making the smell, residents can band together and seek the protections of the federal Clean Air Act. That group can also file a nuisance case (a private tort) because it impacts the neighborhood’s quality of life.

Some residents suspect the tar-like smell is emanating from the Vertex Energy oil refinery across the river in Marrero. The plant faced similar complaints before, when neighbors and then-City Councilwoman LaToya Cantrell fought a plant expansion back in 2016 due to “health concerns” from the fumes. Vertex officials did not return a phone message seeking comment, and an email to the address listed on the company website bounced back.

New Orleans City Council District B representative Jay H. Banks sent a staffer to the residents’ initial meeting on Wednesday. In an interview afterward, Banks said that he is sending a letter to the DEQ asking what can be done about the smell – if anything – and if the odor is harmful to those in his district. The new councilman said this is the first he has heard of the scent, but will work toward getting residents the resources they need.

“We are going to do anything we can do to make the quality of life for residents of District B as good as it can be,” Banks said. “That doesn’t mean we’ll have the power to fix it – this is bigger than the City Council, if it is an environmental issue – but we will work to get the resources to the people who need them.”

Regardless of the cause, neighbors continue to seek the solution. The group will meet again and form a more solid plan, and possibly bring in state and local representatives, Eagan said.

“I smell it all the time, numerous times of day. It’s really affecting me.” Hayne said.