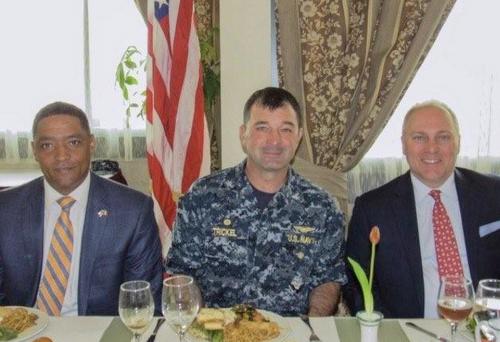 Whether the Democrats or the Republicans controls Congress after the 2018 midterm elections, Louisiana will be a big winner because of what Rep. Steve Scalise (R-La.) calls the “great bond” him and Rep. Cedric Richmond (D-La.) enjoy. Scalise of course is the exceedingly popular Majority Whip who was shot June 14, 2017 during a practice session of the Republican Congressional baseball team. Richmond chairs the powerful Congressional Black Caucus, whose members represent the largest Democratic block.

While Scalise and Richmond frequently agree to disagree on major issues – including President Trump’s recent decision to pull the U.S. out of the Iran deal – their goals are often the same. “We don’t differ on the end goal of helping the needy and protecting our citizens and caring for our elders. We don’t disagree on where we want to end up. Most time we disagree on how to get there,” Richmond told USA Today.

Scalise and Richmond frequently come together to work on issues beneficial to Louisiana including increasing federal disaster relief aid and securing additional funding for coastal protection. They expect to maintain this unique bipartisan friendship – which began when both were members of the Louisiana Legislature – well in 2019 and beyond. Together this pair will have the clout to “bring home the bacon” regardless of which political party is in power. Scalise and Richmond could also seek common ground on broader issues that affect all Americans and deliver a fresh new perspective that is free from political polarization.

Though neither is seeking it, both men are being considered for even greater leadership roles in the next Congress. Republicans are only cautiously optimistic that they can remain in power, especially with the pending retirement of Speaker Paul Ryan and more than 40 others from their ranks. It also does not help Republicans that President Trump remains embroiled in several controversies which have sparked exceedingly low approval ratings.

Although Majority Leader Kevin McCarthy would like move into the Speaker’s slot, he was unable to lock down the needed 218 votes when he previously sought the position. Although Scalise has publicly stated his support for McCarthy, forward-thinking Congressional Republicans are quietly encouraging him to step forward if McCarthy fails to muster enough support. Scalise, already a trusted household name and hero in America’s eyes, was called the “Legend from Louisiana” during President Trump’s State of the Union address in January.

When the fall elections are over, Politico reports Congress’ old Democratic guard will face a leadership challenge by its younger members that has been years in the making. Though Pelosi is a prolific fundraiser and has been the party’s leading warhorse for decades, there is a strong call for new leadership that could also sweep up Hoyer. Both in their late 70s, Pelosi and Hoyer stayed in power through an old style of politics which has grown stale. Many Republicans are using Pelosi – whose poll ratings are as negative as Paul Ryan’s – as a punching bag in this year’s contests. The new Democratic contenders are hard pressed to support Pelosi publically and therefore may not feel obligated to select her as their leader after midterms, according to one Democratic consultant.

If Pelosi resigns or is forced out, the race for Speaker, Majority Leader and Whip will be wide open. In that case, Politico says that Richmond would likely be viewed as a strong contender for Majority Leader or Whip. It would be virtually impossible to deny the popular and powerful leader of the Democrats’ largest caucus a seat at the new leadership table. Richmond would also enjoy the support of many younger members of Congress.

Since his first election to Congress in 2010, Richmond has been groomed for future leadership. During that first campaign, Congressional leaders from around the country including Rep. John Lewis, Rep. James Clyburn, now Sen. Chris Van Hollen and Hoyer – came to Louisiana to campaign for Richmond. They assured Richmond’s victory by raising money and successfully encouraging faith based and community leaders to throw their support behind him.

As chair of the Congressional Black Caucus, Richmond recently released a 1,334-page “Jobs and Justice” agenda which would requests billions for schools, infrastructure, job training and social services. Though much of the agenda is not in line with President Trump’s current priorities, Richmond believes some components could be included in smaller bills.

Scalise and Richmond have a bright future in Congress. 2019 will be a very good year for this dynamic duo to work across party lines for the betterment of Louisiana and the nation.