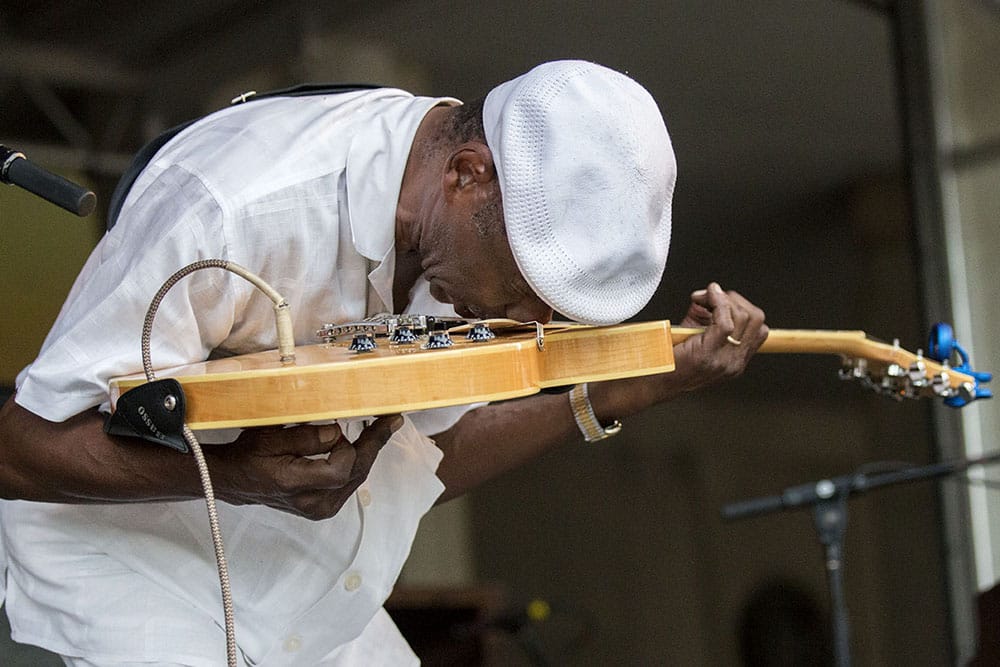 Walter “Wolfman” Washington plays with his teeth during his performance at Jazz in the Park in Armstrong Park June 25, 2015. Washington is set to release a new album produced by Galactic’s Ben Ellman. (Zach Brien, UptownMessenger.com)

Walter “Wolfman” Washington, a veteran in the New Orleans scene for many years, is set to release his first studio album in 10 years: My Future is My Past.

This new record is unlike any he has ever done. He is recording without his band, The Roadmasters, who he has been playing with for nearly 40 years. There is no shortage of talent on this record, however, which features New Orleans’ stars singer Irma Thomas, pianist Jon Cleary, drummer Stanton Moore, and organist Ivan Neville.

Washington has been around talented musicians his whole life from the very beginning. It started with his first cousin Ernest Kador, or Ernie K-Doe, the singer of the 1961 hit, “Mother-In-Law.”

Washington and K-Doe lived on the same block of South Derbigny Street Uptown, between First and Second Streets. There, K-Doe convinced Washington to start playing music.

“[Ernie K-Doe] talked me into playing music. I liked to sing a lot. They had a vocal group in the neighborhood. I wanted to sing so we formed a group called True Love and the Four Gospel Singers,” Washington said. “He gave me my first guitar, electric guitar.”

At an early age, Washington took to one of the biggest stages in American live music. He hit the road with singer Lee Dorsey in 1962 at age 19. They rode in a red Cadillac to New York City where they performed at the Apollo Theater.

“Everybody was saying, that’s where you get your start. Any kind of ‘good musician,’ that’s the first place you should try to go to. I was lucky enough to go with Lee Dorsey,” Washington said. “At first, I was kind of nervous until I met some cats that I grew up with that was already there. They were playing behind Joe Tex.”

He learned some important lessons from these “characters” in the music scene, including David and Walter Lastie, Earl King, and Benny Spellman. They taught him about perspective, the importance of being humble, and how that helps you grow as a musician.

“You’ve got to understand, if you figure you know it, know everything, there’s always something that you may not understand. If you pay attention, you will find out these things,” Washington said. “A lot of cats, they figure they know it all when they wound up being stupid.” 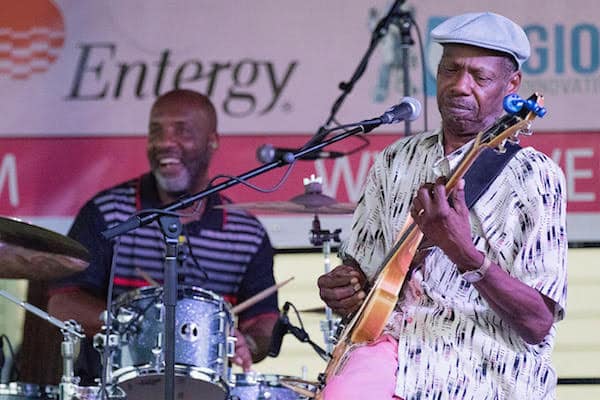 Walter “Wolfman” Washington performs with Jon Cleary and the Absolute Monster Gentlemen at Wednesdays on the Point in Algiers on July 1, 2015. (Zach Brien, UptownMessenger.com)

Washington has never had a problem playing with anyone; in fact, that’s where his nickname “Wolfman” comes from.

“I wasn’t afraid to go on the stage with anybody. It just so happened that a friend of mines gave me the nickname. ‘You never know when the wolf is in the place.’ I can’t say if I can play better than they can or if they can play better than me. It makes no difference to me. I just do what I do,” Washington said.

His flexibility has come in handy in several instances, especially one night at the d.b.a. nightclub on Frenchman Street. According to him, this was one of his most memorable gigs.

“The only exciting thing that has ever really happened playing at the d.b.a. club is that Stevie Wonder came in and sat in with me on one of the sets,” Washington said. “That was about 3 or 4 years ago.”

This adaptability also came in handy when making My Future is My Past. It was an entirely new experience for Washington that made him uncomfortable at first, but he came around to it.

“I wasn’t really expecting to record unless I was recording with my band [The Roadmasters]. It just so happened that Ben [Ellman] offered me the opportunity to do an acoustic CD, which I have never done before, you know,” Washington said.

“Then when I looked at the songs he said he wanted to do, I was kind of nervous about it because the songs he wanted me to do, I had never recorded. I had never done them on stage. It was really a surprise. I got to know him, and I really liked it.”

His favorite song on the record is the first one, “Lost Mind” because of its narrative quality.

If you have ever seen Washington play, you will probably remember a few things: his outfit—which he gets at Soul Train fashions—and his theatrics, playing with his teeth. That was a trick he got from one of America’s most well-known and talented musicians.

“I learned that from Jimi Hendrix, one of the masters of that. I met him just on the tail end of me coming in,” Washington said. “I asked him ‘How do you do that?’ He said ‘It’s easy, as long as you don’t use your tongue.’”

Walter Wolfman Washington will be performing two shows at Sung Harbor on Saturday April 7. He will be previewing songs from his new record My Future is My Past that comes out on Anti Records on 4/20/18. The Wolfman will be playing with the stellar trio of Stanton Moore, James Singleton and David Torkanowsky, who are also featured on the record.