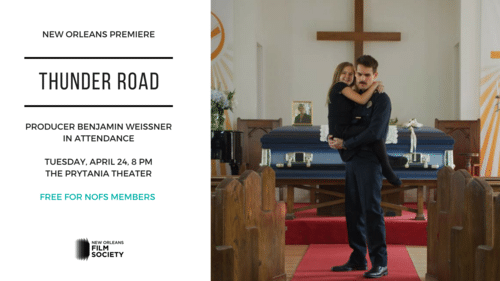 “Thunder Road” tells the story of a flawed police officer, made worse by the passing of his mother (image courtesy the New Orleans Film Society).

Join the New Orleans Film Society as they present the homecoming of New Orleans native director Jim Cummings’s first feature film “Thunder Road,” which won the Grand Prize in SXSW 2018 and heading to Cannes Film Festival for its international premiere in May.
“Thunder Road” tells the story of a flawed police officer, Jim Arnaud (Jim
Cummings), who’s life is made worse by his mother’s passing. Unable to change his life for the better, his only stability comes in the shape of his daughter (Kendal Farr).

New Orleans’ premiere of “Thunder Road” will be on Tuesday, April 24, 8 p.m. at the Prytania Theater. The screening is free for New Orleans Film Society members, with public tickets available at the Prytania box office and online.

Producer Benjamin Weissner will be on hand to answer audience questions. For more information or to RSVP online, click here.