A large new commercial development planned for a vacant lot on Magazine Street in the Lower Garden District will include a number of new businesses around a central courtyard, with a new wine bar from the owner of Tujague’s as the first announced tenant.

The development at 1300 Magazine Street (between Melpomene and Thalia streets) is tentatively called the “Framework” building and is being built by Felicity Property Company, the team that also developed The Julian building at 1581 Magazine, the newly opened Auction House Market in the Warehouse District, and redeveloped the Saint Anna building on Prytania. It will consist of two separate two-story buildings on either side of the lot, with a central European-style pedestrian arcade in the center leading to a courtyard in the rear.

Each of the buildings will have a large ground-floor commercial space on the front facing Magazine Street, and a smaller commercial space in the rear facing the courtyard, explained Patrick Schindler of Felicity Property Company in a meeting with neighbors on Monday evening. The upper floor will be private office space arranged to suit the needs of the firms that locate there.

If necessary, Schindler said, the largest 3,000 square-foot space in the front could be divided into two smaller businesses, depending on the final mix of tenants. The idea for the building — and the inspiration for its name, The Framework — are based in the ideas of a walkable, community-oriented “Third Place” separate from home and work as described by urban planner Ray Oldenburg, Schindler noted.

“It’s still within the rhythm of Magazine Street,” Schindler said. 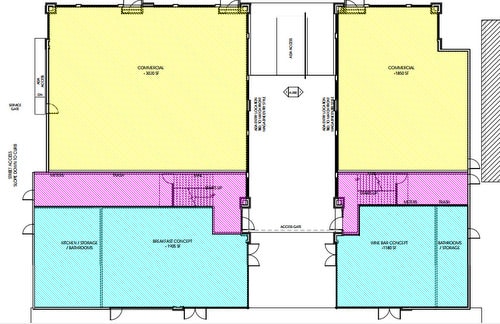 The first and only confirmed tenant thus far will be a new wine bar by Mark Latter, owner of Tujague’s downtown and a partner in Bar Frances on Freret Street, in one of the smaller spaces facing the courtyard. Latter said the bar — the name of which has yet to be finalized — will primarily focus on wine and cocktails, plus a charcuterie menu of meats and cheese, but no on-site kitchen.

The entrance to the wine bar will be through the courtyard, and it will have doors that open widely into the space, encouraging interaction with the outdoors. The other businesses will use the courtyard as well, Schindler said, noting that he hopes it will be enjoyed equally by families with children and couples on dates.

“The whole back of the building will open up onto the patio,” Latter said.

Schindler said he is in negotiations with some other potential tenants, but none that can be announced thus far. Ideally, he said, the Framework building would also host a breakfast or juice-focused morning spot, a dinner restaurant, and perhaps a lifestyle business such as a gym — creating a mix of businesses that do not heavily overlap, but would keep a flow of customers throughout the day.

Felicity owns a parking lot directly across the street that will serve the property, Schindler said. The Framework building itself needs no variances or special permission from the city, although the wine bar itself will need a conditional use to operate within the space.

Construction is expected to begin in April and will likely take about nine months, Schindler said. Latter said he hopes to open his business within 60 days of getting into the space, with a best-case opening date of Dec. 1.

The neighborhood meeting about the project drew nearly a dozen attendees Monday night, and most were generally receptive to the plans for both the Framework building and Latter’s wine bar. After receiving assurance that no live music is planned on the patio, their questions focused on the use of the alleyway alongside the property and the plans for trash, and residents seemed generally amenable to the answers they heard.

“The saying is, ‘The devil’s in the details,’ but conceptually I think it looks great,” said Jesse LeBlanc, a member of the Coliseum Square Association and owner of “The Green House Inn” bed and breakfast nearby.

Julie Simpson, also of the Coliseum Square Association, said that Felicity’s work on other projects will help reassure neighbors that the Framework building will be a positive addition to Magazine Street.

“I think we’re all excited to see something happening in that lot, and you have a great reputation in this neighborhood,” Simpson said.