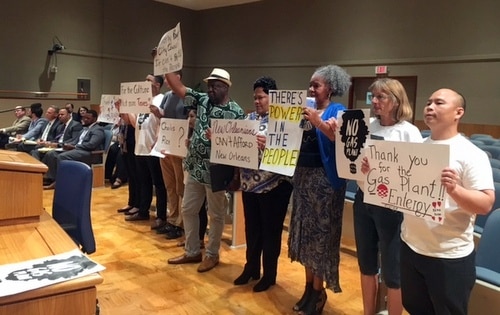 Entergy New Orleans has the City Council just where they want them – frequently playing catch up. While Entergy came into existence to provide gas and electric services to the ratepayers, they also have an obligation to maximize profits for their stockholders. The more Entergy controls costs, the better stockholders like it and citizens lose. Entergy is a major player in the community through their grant programs, their sponsorship of non-profit organizations and their frequent — and often behind the scenes — political maneuvering. Angering Entergy can have negative financial repercussions, as WBOK recently discovered.

The Council’s job is to tell Entergy “no” as often as necessary and to ask “why” something is or isn’t being done so that ratepayers receive maximum value. Unfortunately, the Council can only do so when they are on top of the spin. While the Council has an excellent team of utility consultants and skilled in-house staff, councilmembers may not be familiar enough with all the constantly changing nuances of utility regulations and cost-effective grid management. Incoming councilmembers surely will need a serious tutorial to better understand how ratepayers can win every battle.

Case in point – the controversial, recently-approved gas plant: Experts agree that long-term the plant is needed to prevent brownouts. The costs of construction are being passed down to the ratepayers who then will also pay for the energy they consume. Why didn’t the Council force Entergy to pay for plant construction or to share profits? Why is the smaller plant being constructed? If the larger plant had been approved, New Orleans would have had excess power to sell on the open market.

According to yesterday’s Council Utilities meeting, Entergy is currently “behind” in creating more renewable energy and addressing recent power outages. These deficiencies are only occurring because the Council has been slow to demand an expedited level of performance from Entergy and the investment associated with that performance.

ENO occupies a very unique position as a critical city vendor, albeit one that can’t be fired. With the new mayor and council taking office on May 7, longtime utility watchdog Susan Guidry will be retiring and Jason Williams may pass the Council Utility Committee chairmanship to Jared Brossett, currently vice chair. How will Brossett and the new committee handle increased citizen expectation? New Orleanians deserves the lowest cost and the best service possible.

CANDIDATES ALREADY POSTURING FOR NEXT ROUND OF ELECTIONS

Just as the victors of Saturday’s special elections are transitioning to their new offices, several names are already popping up to replace them. Chelsey Richards Napoleon, Chief Deputy Clerk of Civil District
Court, would like to step into the shoes of her mentor and boss – Dale Atkins. Readers will recall that Atkins herself first served as Chief Deputy to longtime Clerk of Court Dan Foley. Napoleon intimately knows the ins- and- outs of the office’s operations and will instantly be a major player in the race because of her wealthy and powerful uncle Alvin Richards, whose company Richards Disposal has been providing waste management services in New Orleans for decades. Richards is said to be calling in favors from elected officials and others he has supported over the years. His wife Sylvia Scioneaux Richards is a powerful neighborhood leader in New Orleans East.

Richards’ major competition could come from Councilmember Jared Brossett who is looking to play a more powerful role in New Orleans politics. A member of the LIFE political organization, Brossett has steadily risen through the political ranks and clearly sees the Clerk’s office with a larger budget and more employees as his next step. Some politicos are urging former judge and mayoral candidate Desiree Charbonnet to consider the race but Charbonnet is still keeping her options open.

Former legislator Austin Badon is eyeing the soon-to- be-vacant Clerk of First City Court slot following Clerk Ellen Hazeur’s election to Civil District Court. It is not certain if Hazeur’s Chief Deputy Lisa Hubbard- who will serve as Interim Clerk – is interested in the job. Hubbard is the daughter of long-time political operative Don Hubbard. Outgoing Councilmember Nadine Ramsey could also run for the position. As a resident of Algiers which is represented by Second City Court, Ramsey could not vote for herself but state law allows her to serve.

Governor Edwards is expected to call both these election to coincide with the fall congressional races. Several other contests will also be on the fall ballot.

It should come as no surprise that Transit-Center, the New York based advocacy foundation that funds Ride NOLA, would ask the RTA to consider replacing current management agency Transdev, a French conglomerate formerly known as Veolia. Ride NOLA supporters – who have repeatedly clashed with Transdev – were involved in Cantrell’s mayoral campaign and now in the transition. But the real decision to replace Transdev will probably rest with Cantrell’s trusted advisor Bob Tucker who has been a keen observer of New Orleans city government since Moon Landrieu was mayor. Tucker knows transit and could call for a total re-haul of the agency, its current board and many of its consultants. Just because Transdev might be out at the RTA in the fall of 2019, they will still have a presence in New Orleans. The company has done an excellent job operating the city’s sewerage treatment plant for many years.