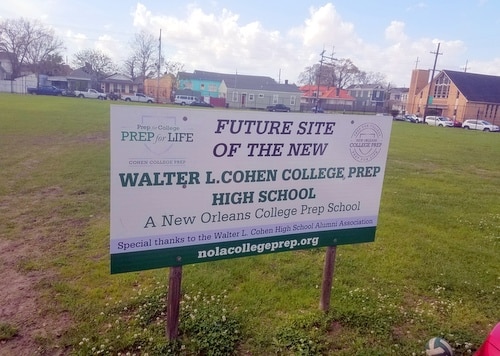 A sign on the athletics field at the Cohen High School campus marks the location of the new building. (Robert Morris, UptownMessenger.com)

The long-awaited construction of a new Cohen High School campus on Dryades Street is now moving forward swiftly, with New Orleans College Prep officials preparing for plans to begin work as soon as this year.

The construction of the new 90,000 square foot building is expected to cost roughly $36 million, and is one of the last projects the Recovery School District is managing in New Orleans before transferring all its assets back to the Orleans Parish School Board. The building planned essentially for the same site as the current Cohen but on the opposite side of the property from the current campus, which will be demolished when construction of the new building is complete.

Cohen was previously part of a plan to be relocated to the former Booker T. Washington site and combined with that campus in Central City, but officials with the College Prep charter network and the school’s community and alumni vehemently opposed that idea. In 2015, the Recovery School District announced that Cohen would not be combined with Booker T. Washington, and would be rebuilt on its own site instead, but little more was said about those plans in the year since.

The first important question to address before proceeding is what to do with the current students at Cohen during construction, Kaharick said during a meeting of the College Prep board’s facilities committee on Thursday. The Recovery School District had said two elementary buildings might be available for swing space, or the Cohen students could remain in their current building during the construction period, Kaharick said.

The primary drawback of the two elementary buildings is that they are both so small that they would severely constrain the ability to recruit additional freshman next year or in the years following — which would thus cause significant cuts to the school’s budget, Kaharick said. Modular classrooms could be needed, and the Recovery School District is hesitant to spend money on temporary buildings that could instead be used for the construction of a permanent facility.

Aside from the hassles of construction itself, remaining at Cohen will likely add to the cost of the project as well, because demolition of the old building will have to be delayed until after the new building is complete and the workers will be more constrained. School officials, however, feel that those drawbacks are minor compared to the long-term effect of displacing current students and limiting enrollment.

“We would not be able to accept as many 9th graders as we needed to break even,” said College Prep board member Celeste Eustis.

Cohen has about 100 freshman this year, down from 135 in years past, said chief financial officer Jonathan Tebeleff. It needs to return next year to between 130 and 150 to stave off cuts at the school, but has already received 129 applications during the current enrollment period.

The coming year is expected to have more freshmen than usual because McDonogh 35 High School will not be accepting any, noted Kaharick. Further, Orleans Parish School Board officials are predicting increased numbers of incoming 9th graders in the year to come as well — all combining for a critical time for Cohen to be welcoming more students, rather than constraining its enrollment.

“We could handicap ourselves not just for this year, but also the ripple effect of every year for that class,” Kaharick said. “It could have a ripple effect of several million dollars over the course of four years.”

Despite improved School Performance Scores, Cohen has struggled to be a top choice for students when they apply to high school. The retention rate, however, is excellent — less than 5 percent of current freshmen have applied to transfer away, Tebeleff noted.

“When kids get here, they feel that support, and they’re very happy and they stay,” Kaharick said. “I feel if we bring in a freshman class that’s a little larger, we keep some of those kids.”

The facilities committee meeting coincided with the first formal day of work for new College Prep CEO Joel Castro, but he said he had already been involved with meetings with the RSD and researched the issue on his own. Limiting the size of the incoming freshman class — at precisely a time when Cohen needs to grow — would be worse than the construction problems, Castro agreed.

“I don’t think we can take the risk on enrollment,” Castro said. “If we cede that to anyone, it would be hard to recover from that, both financially and culturally.”

Further, Castro said, managing modular classrooms at a temporary site becomes its own headache for principals and teachers that would distract from education more than the new construction would. On the other hand, the site of the new building being constructed will actually inspire the Cohen community, Castro said.

“When those building walls go up and folks start to see that, the excitement kicks in,” Castro said. “That is a very big attraction for those middle schoolers coming up the pipeline.”

Student safety is the first concern for any administrator, Castro said, but based on his discussion so far, he said he believes that the site and the traffic around it can be mitigated. No one wants to teach school next to a construction site, but administrators must ultimately choose the option that has the fewest long-term detrimental effects, he said.

“I believe these can all be abated where we can stay in the same space,” Castro said.

The Cohen alumni association had initially been concerned about the negative impacts of keeping the current students in place, as well as the additional construction costs, said Jim Raby, the association president and a College Prep board member. After hearing about the longer-term potential impact to Cohen’s enrollment, however, he said he and the association were prepared to yield to the recommendation of the new CEO.

The members of the facilities committee agreed to notify the full board of their belief that staying on campus was the preferred option and — barring any objection — to pass that information on to the Recovery School District as well.

The new building has yet to be designed but will likely be modeled after the Livingston Collegiate Academy building in the lake area. Construction is expected to take three years, with an additional year of demolition of the old Cohen building.

The current Cohen High School building will be demolished after construction is complete on the new building next door, officials say. (Robert Morris, UptownMessenger.com)