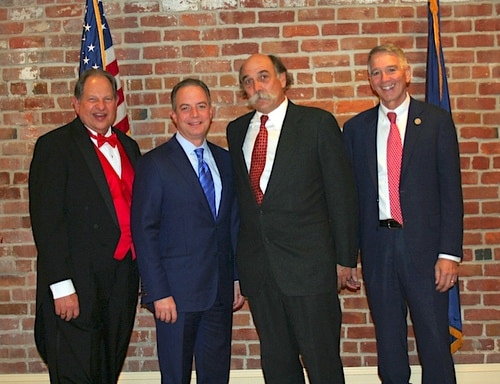 Born in Gentilly and raised in New Orleans East, Villere is a descendent of Jacques Phillippe Villere, who defeated William C.C. Claiborne to become Louisiana’s second Governor after U.S. statehood and the first Louisiana native to hold that office. Etienne Roy de Villere, Jacques Villere’s grandfather, was one of the founders of New Orleans, having accompanied Iberville on the voyage from France. The British landed on the Villere family sugar plantation, Conseil, in St Bernard Parish just before the war of 1812 began. The family helped defend the region during the Battle of New Orleans.

Roger Villere attributes his interest in Republican-style politics to his days at Rummel High School where he learned about the free enterprise system. “I always thought of myself as a Republican,” said Villere. Later as the owner of Villere’s Florist, he lobbied state legislators to create better laws to serve that industry, and became active in Jefferson Parish civic affairs.

Billy Nungesser, Sr., founder of Louisiana’s Republican Party and father of the state’s current Lt. Governor, initially tapped Villere to build Republican support on the east bank of Jefferson Parish. Villere quickly worked his way up through the party structure and in 2004 won the race for state party chair. He was re-elected six times without opposition. Villere will step down in March, 2018 after 14 years of service.

Villere considers the rapid growth of the Republican Party in Louisiana as his major accomplishment. “The Republican Party has changed the face of politics in Louisiana,” Villere exclaimed. “When I got started, the party was young in Louisiana with just a few elected officials and only one state-wide official, Secretary of State Fox McKeithen. Today there is only one Democrat elected statewide – Governor John Bel Edwards. Republicans are also the majority of our Congressional delegation, Supreme Court, BESE board and Public Service Commission. We also control both houses of the Louisiana Legislature,” Villere continued.

Based on current growth patterns and the popularity of President Trump in Louisiana, Villere believes that the Republican Party will grow to more than 1 million members within the next “year of so.” “Within 3 to 5 years, we should be the majority party in Louisiana,” he proclaimed.

Villere said that building the party took a lot of diplomacy to get the various factions together who were used to having their own way. “I worked really hard to make everyone part of the process,” he said. Villere also credits the republican women’s clubs for supplying energy and enthusiasm in the races. “Our Republican women are incredible workers.” Villere is also interested in bringing younger people into the party.

“The Republican Party in Louisiana is headed in a good direction,” said Villere. “Though I do not intend to exit politics, I am excited for fresh, new leadership to lead the party into the future.”

DR BERNICE KING &, OTHERS TO KICK OFF YEAR-LONG ANTI-VIOLENCE INITIATIVE IN NEW ORLEANS

Students from public, private and parochial schools, as well as parents and members of the faith based community have been invited to attend Friday’s free session which will also include remarks from Congressman Richmond, Mayor Landrieu, Mayor-Elect Cantrell, nationally syndicated radio personality Angela Yee and St. Augustine High School alumni Leonard Fournette, NFL running back with the Jacksonville Jaguars.

“We welcome the entire community to join us for this year-long opportunity to promote non-violence and encourage higher academic outcomes,” said McKneely.