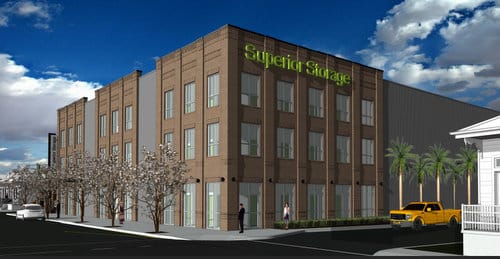 A rendering of the proposed storage facility. (via City of New Orleans)

A three-story self-storage facility planned for most of a city block on Tchoupitoulas Street won easy approval from the City Planning Commission on Tuesday, sending it to the City Council for a final decision in the coming weeks.

Developer Gordon H. Kolb is planning the storage complex at 4866 Tchoupitoulas, the current site of the closed Guillot’s Sanitary Supplies. It will sit on the block bounded by Tchoupitoulas, Upperline, Lyons and South Front Street at the rear, wrapping around a cluster of homes at the Tchoupitoulas/Lyons corner, according to the application.

The enclosed, climate-controlled facility will combine a total of 13 lots on the block and part of South Front Street that the developers are also seeking to acquire from the city, Kolb said. The developers have already had a number of productive meetings with nearby residents and city planning officials, Kolb told the City Planning Commission in a hearing on Tuesday.

The city’s planning staff had recommended approval of the project, with a total of 13 standard operating conditions attached, and Kolb said his company agrees with all of them.

“We thoroughly support the staff report as well as the complete 13 provisos outlined in the staff report, and we will work with the staff to address any technical issues that they may have,” Kolb said.

No one appeared at the City Planning meeting in opposition to the project, and the commissioners voted unanimously to recommend its approval. Their recommendation will now be forwarded to the City Council for a final decision.

To read our live coverage of the City Planning Commission’s meeting Tuesday, see our previous article on its decisions regarding short-term rental regulations and the former Zara’s grocery site in the Lower Garden District.