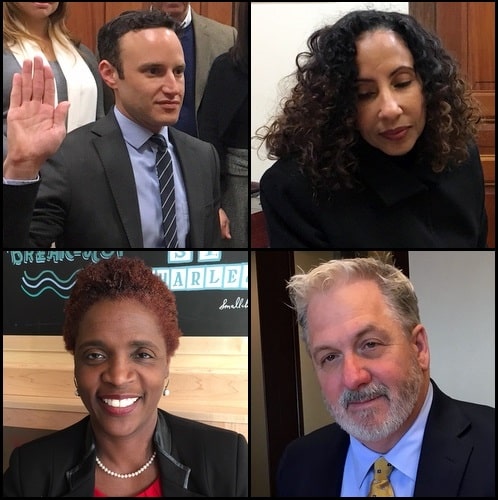 Judicial candidates (top from left) Richard Perque, Ellen Hazeur and (bottom left) Taetrece Harrison qualified by Thursday morning, and Richard Duplantier was expected to do so soon. (photos by Danae Columbus for UptownMessenger.com)

New Orleans attorney and former judicial candidate Richard Perque was waiting in the cold yesterday with his family to be the first candidate to qualify for Civil District Court Division A. The seat was formerly held by Tiffany Chase who was recently elected to the 4th Circuit Court of Appeal. The Louisiana Supreme Court appointed longtime civil rights activist Henry Julien, husband of CDC Judge Ethel Julien, to sit ad hoc.

A graduate of Loyola University and Loyola Law School, Perque hails from a family with a substantial Louisiana political pedigree. His grandfather, the legendary Risley “Pappy” Triche, was a lawyer and one of the state senate’s most colorful members. Perque’s mother, Jane Triche Milazzo, was the first female elected judge in the 23rd Judicial District and was appointed to the U.S. District Court for the Eastern District of Louisiana by President Obama in 2011.

Perque initially practiced law with his family in his hometown Napoleonville before moving to New Orleans in 2008 where his practice includes family law, wills and estates, personal injury, civil rights, corporate and general civil litigation.

Having developed a significant social media following, Perque is active on the political scene raising money and hosting events in his elegant Uptown home. Perque is already calling in political favors for this race. In 2013 Perque received 13.4 per cent of the vote and finished third in a Traffic Court race that was won by Steven Jupiter. Perque briefly considered another judicial race in 2014.

Councilmember Jason Williams appointed Perque to the Human Relations Commission in 2014. Perque was similarly appointed to the Louisiana Commission on Human Rights by Governor John Bel Edwards. He is also a board member of the Morris Jeff Community School.

Clerk of First City Court Ellen Hazeur, who qualified shortly after Perque yesterday, is considered the early favorite in the judicial race. Hazeur was a popular member of the New Orleans City Council, elected in 1994 and was elected First City Court Clerk in 2000.

In 2010 Hazeur entered a million dollar race for civil district court against Regina Bartholomew Woods – now an appeals court judge. Hazeur spent in excess of $500,000 – mostly personal funds – and received 36.69 per cent of the vote. Hazeur graduated from Xavier University and later from Tulane Law School.

Hazeur has been an elected official for 24 years. In many recent elections, New Orleans voters have exhibited a propensity of electing African-American women to the civil, criminal and appeals court bench. A victory by Hazeur would continue that trend.

Hazeur’s perceived early lead and Perque’s political and social pedigree is not stopping long-time trial lawyer Richard G. Duplantier Jr. from entering the race. The Duplantier family has been in Louisiana since Armand Duplantier arrived in 1781 as a French cavalry officer who later became an aide de camp to the Marquis de Lafayette.

Managing partner of Galloway Johnson Tompkins Burr and Smith, Duplantier has always been interested in public service. “New Orleans needs good, experienced jurists to keep up the quality of our courts,” said Duplantier. “We lost a couple of excellent judges when Paula Brown and Tiffany Gauthier Chase moved to the appeals court. They need to be replaced with judges experienced in trials. I have been handling a wide variety of cases for more than 30 years.”

A New Orleans native who grew up in New Orleans East and Gentilly, Duplantier attended Marquette University and Loyola Law School. Duplantier calls himself a litigator who practices defense law and enjoys an 80 percent trial success rate. “The next judge must know the law and be able to move a docket. He or she should be able to quickly give lawyers dates for hearings and trails so that cases get settled. Everyone deserves to have their cases heard in a timely fashion,” he continued.

Duplantier has served on the board of directors of the ASI Federal Credit Union for the last 12 years, worked with the Beacon of Hope Resource Center after Hurricane Katrina and is president of the Gulf South Chamber.

Born and raised in the Hollygrove neighborhood, Taetrece Harrison qualified for judge today because of her deep respect for family law. “What is in the best interest of the child always comes first,” Harrison said.

Harrison, 50, and a graduate of Southern University Law School, has been practicing predominately family law for almost 12 years. In 2014 she ran unsuccessfully against incumbent judge Bernadette D’Souza who occupies the dedicated family law seat.

Harrison says the new Section A judge will preside over the family court docket for up to two years until another judicial vacancy occurs. Currently every new judge initially handles family court cases.

“The people of New Orleans deserve a fair and impartial judge who will give them the opportunity to be heard in court,” said Harrison. “Sometimes people would like a judge to rule in a particular way. I’ll do what’s right- not what’s liked. “ Harrison also says she will move her docket quickly to provide access to justice for everyone.

Harrison plans on running a grassroots campaign, shaking hands as she works the neighborhoods. “Judges need to be in the community and familiar with all parts of the city. That’s where our plaintiffs and defendants come from,” she concluded.

Another candidate considering the race is Omar Mason. Qualifying ends Friday at 4:30 p.m.