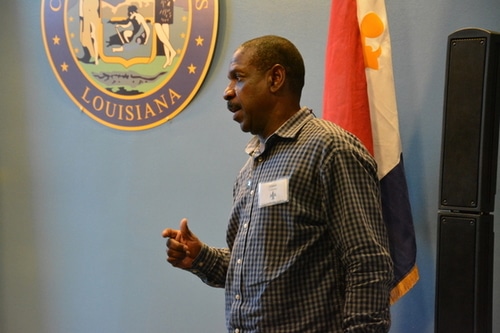 Lionel Coleman was vice president of the NOPD Sixth District Police Community Advisory Board and an avid volunteer in other Central City civic organizations. (photo via city of New Orleans)

After Lionel Coleman, a Central City neighborhood activist who served on the NOPD Police Community Advisory Board, recently passed away, city officials released a tribute to him Tuesday morning.

Coleman will be remembered at a service Friday at New Hope Baptist Church. To read the tribute to him from Mayor Mitch Landrieu’s Office of Neighborhood Engagement, see below:

Friends and family will gather on Friday, February 2, 2018 at New Hope Baptist Church for the Memorial Service to commemorate the life of Mr. Lionel Coleman, a longtime civic leader and advocate for the Central City community. Mr. Coleman’s community involvement and commitment spans over 20 years. He fervently advocated for improved quality of life on the local and state level.

Since 2005, Lionel served as the served as the President of the Home First Neighborhood Association, where he was instrumental improving community relations in Central City including serving as Vice President for NOPD 6th District Police Community Advisory Board.

His passion and commitment to his community certainly shined through his work; he served on several nonprofit boards including Keller Group Neighborhood Foundation, Booker T. Washington Alumni Association and New Hope Baptist Church. Mr. Coleman was a friend to the Mayor’s Neighborhood Engagement Office and graduate of Civic Leadership Academy. He was was a kind and gracious gentleman who will be missed dearly by the Central City community.