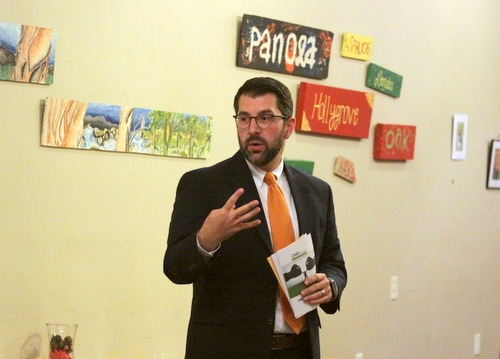 With a majority of incoming New Orleans City Council members having campaigned on frustration with the rapid conversion of residential homes into small temporary hotels, tightening the city’s short-term rental laws is likely to be a top early priority when they are seated next year — while they get a grasp on larger issues like fixing the drainage system, incoming City Councilman Joe Giarrusso III told Carrollton neighborhood activists.

Giarrusso will not be take office in the District A seat on the City Council that he won in October until next year, but said he has already had individual meetings with the other four incoming members of the City Council who were elected in the primary. He is setting up meetings with mayor-elect LaToya Cantrell the remaining two council members — Jay H. Banks in District B and Cyndi Nguyen in District E — who were elected in the Nov. 18 runoff, and all have expressed a desire to work together, he said.

One obvious early area that they are likely to examine is short-term rentals, which were a “significant issue” in all their campaigns, Giarrusso said Thursday night at a joint meeting of the Carrollton United and Carrollton-Riverbend Neighborhood Association.

“One of the first things I learned as a young law clerk is how to count to four, and that applies in working with the City Council,” Giarrusso said, referring to the number of votes it takes to pass a law. “If you look at short-term rentals, you have Council Member Brossett who was against the ordinance as passed, and you have at least three of us who have expressed great reservations about the ordinance as it currently exists.

“Mayor-elect Cantrell has expressed those same concerns, so I’m hoping we can find some common ground right at the beginning,” Giarrusso concluded.

One of the most controversial aspects of the short-term rental law was that homestead exemptions are not required for all short-term rentals in residential neighborhoods, which would essentially restrict AirBnB rentals to property owners who live in the homes in question. That is one area the Council will likely re-examine, Giarrusso said.

“I think the homestead exemption is back on the table,” Giarrusso said. “Mayor-elect Cantrell specifically spoke about it.”

Another emerging issue is that of property owners seeking to rezone residential houses to some form of commercial property in order to gain greater permission for short-term rentals. Giarrusso is beginning a broader exploration of the issue, meeting with thought leaders on housing issues and examining the revenue flowing into the Neighborhood Housing Improvement Fund from the AirBnB permits.

The lowest-hanging fruit is probably improving the reporting procedures so the city has better access to data they can cross-reference for enforcement purposes, Giarrusso said. Ultimately, he said, the mayor and City Council will have to work together to determine the effect of the policies so far and to promote stronger revisions to it.

“You’re going to have to look on a long-term basis about how short-term rentals are being implemented,” Giarrusso said.

In the longer term, Giarrusso said, the campaign made clear that drainage and flooding is the top issue facing the City Council. Crime is obviously as important, but it is based on more deeply rooted systemic issues that are in some ways not as directly within the council’s grasp.

Operating a functioning drainage system, however, is a major part of the city’s job.

“When it comes to the Sewerage and Water Board, people tend to believe you have obsolete equipment and a culture that isn’t working, and those can be addressed,” Giarrusso said. “Frankly, the expectation in the 21st Century is that when you have a rain event, water is not going to sit for hours and the pumps are not going to be broken.”

Examining the system and its failures will be a top priority of all incoming City Council members, Giarrusso said, because the public needs to be able to have confidence in their drainage system.

“At the end of the day, there may be things that are more dynamic and more visionary than fixing the Sewerage and Water Board,” Giarrusso said. “But if you can’t get the basic things right, you can’t get to those bigger steps.”