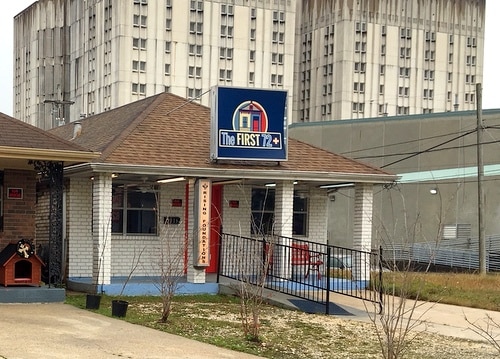 The First 72+ provides services to formerly incarcerated people immediately after they return to society. (photo by Danae Columbus for UptownMessenger.com)

Legislators from across the state were beaming last June during Governor John Bel Edward’s “historic moment” when he signed a 10-bill criminal justice reform package aimed at saving the state millions annually and reducing incarceration.

Authored by such bipartisan heavyweights as State Senate President John Alario, Senators Danny Martiny and Dan Claitor, and Rep. Helena Moreno, Walt Leger and Joe Marino, the new legislation was designed to help formerly incarcerated individuals more easily reintegrate into their communities by reducing their financial burdens and helping them have better access to jobs and other necessities including occupational licenses and food stamps.

None of that jovial spirit was visible last week when former State Senator Derrick Sheppard, who had served time in federal prison for money-laundering, arrived at an introductory get-together Mayor-Elect LaToya Cantrell was hosting for area legislators. In the midst of an unexpected public backlash, Cantrell quickly distanced herself from Sheppard.

In addition to Louisiana, several other states including Hawaii, Texas, Maryland and Virginia have recently enacted laws or executive orders that benefit the formerly incarcerated including a restoration of voting rights for felons ( Virginia) and a Second Chance law that allows non-violent first offenders to obtain a court order that shields a first time misdemeanor from the public (Texas).

Yet many formerly incarcerated individuals in New Orleans feel they are “perpetually punished.” They suffer from lower earnings, denial of jobs and/or work licenses, inability to vote, and ineligibility for public housing, student loans, etc. To survive, stabilize and eventually become self sufficient, they need support, encouragement and acceptance from the people who control New Orleans’ economics.

“The buck stops with the business community,” said one formerly incarcerated person. “We did our time, paid our dues, now we deserve a fair chance of getting a job. Without a good paying job, there is no redemption, no rehabilitation, and forever more no participation in our society.”

Elected officials have to become “very vocal” as well. “It’s one thing to vote for criminal justice reform in Baton Rouge but legislators must also work at home to get individuals back into the workforce,” he continued. Some advocates of second chances also believe that the media has been hypocritical on the subject – supporting criminal justice reform on one hand and being critical of select efforts or individuals.

The Louisiana Department of Corrections will release 15,000 individuals next year. Except for the First 72+ and Goodwill Industries, there are very few organizations which will greet them with open arms. Since their founding almost three years ago, the First 72+ has provided services to 200 men. Goodwill offers critically needed job training and job readiness skills. Many other returnees flounder due to lack of services.

According to a May 22, 2016 story in the Washington Times, one in three Americans are arrested by the age of 23 and 2.2 million Americans are currently incarcerated. The Simmons School of Social Work reports that within three years of release 67.8 percent of ex-offenders are rearrested and within five years, 76.6 percent are rearrested. “Recidivism harms both the families of inmates and society in general, as taxpayers continue to support a broken system that set ex-offenders up to fail once they are released,” the Simmons report suggests.

Though it is often unrealistic for the formerly incarcerated to expect to return to “normal life” once they are released, the public’s attitude – including the business community, elected officials and the media – must evolve for reintegration to really work. If not, recidivism and crime will continue to increase.

2 thoughts on “Danae Columbus: Better re-entry services for people leaving prison should be a 2018 goal”