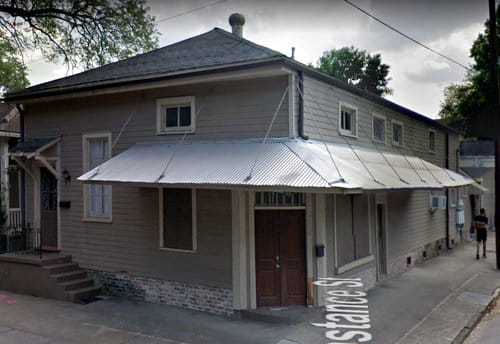 The building at 940 Louisiana Avenue. (via Google Maps)

A rezoning to create an ice-cream shop on Louisiana Avenue in the Irish Channel was rejected by the City Planning Commission this week amid neighbors’s allegations that it is merely intended as a “front” for a commercial AirBnB operation.

The owner, however, says he is just using short-term rentals as a way of supporting his small business in its early stages, providing a test case in New Orleans’ growing conflict over the operation of AirBnB in residential neighborhoods as the issue moves to the City Council.

Reginald Commodore, a 41-year-old engineer, is seeking to rezone the building at 940 Louisiana Avenue (the corner of Constance Street) from residential to neighborhood business in order to open an ice-cream parlor called “Love Kreme.” That could be accomplished by a conditional use within the current zoning, officials have said, but Commodore also wants to use the two apartments inside the building as short-term rentals, which requires the full rezoning.

He has always rented out one of the apartments to help him pay off the mortgage, he said, but it is not always easy to keep occupied. More recently, he has listed it as a short-term rental, and has had more than 100 happy guests, he said.

“I have so far boot-strapped the entire process from paying off my mortgage to self-funding the build-out of the space,” Commodore said. “I plan to expand the workspace and hire more employees. I would need the flexibility of a commercial short-term rental so that, when ready, I can begin that project. If I had a permanent tenant, I would be restricted to when I could start that project.”

When Commodore brought his request to the City Planning Commission on Tuesday afternoon, he carried with him signatures and emails of supporters for his ice-cream idea. The nearby residents and neighborhood leaders who showed up to the City Council chambers, were concerned about the usual parking and litter problems associated with businesses, but were unequivocally opposed to short-term rentals.

The building has not actually served a commercial use in decades, neighbors said. While the apartments have been rented out, the ice-cream area has been either vacant or a studio apartment as well, the said.

“What need exactly will this small hotel fill in my residential neighborhood?” asked Bill Sawicki of the Irish Channel Neighborhood Association. “Collectively, the approval of so many small hotels in residential zones will have tremendous long-term negative impacts on the residential character of all our historic neighborhoods, as well as worsening the erosion of affordable long-term housing stock.”

In rebuttal, Commodore said that the short-term rentals would require a separate conditional use, so they would still be subject to approval from City Planning and the City Council. In the meantime, he is seeking the rezoning to give him the best chance to make the business profitable in the future, he said.

“It gives me the greatest flexibility to succeed,” Commodore said. “I don’t want to come back every time here if I want to expand the workspace or hire more employees.”

Commodore also suggested that the coalition of his supporters is a better representation of the city than the opponents who attended the meeting to criticize him.

“I’ve got a greater representation, I feel, as far as a generationally, racially diverse mix, than what’s being presented here,” Commodore said. “As far as I’m concerned in my neighborhood, I’m the only one that I see that looks like me. As far as business owners, I can find no one but one other person who I consider a peer for myself.”

While praising and encouraging Commodore’s entrepreneurship, the City Planning Commission found his reasoning for adding short-term rentals unconvincing. Commission chair Royce Duplessis said he would like to see a successful ice cream parlor, but he can’t a support a zoning change just to satisfy the owner’s business model when the neighbors are so opposed.

“The application, the zoning that is being proposed here is quite frankly to me just frightening, especially for this particular neighborhood,” said Commissioner Jason Hughes. “At a time when the character of the neighborhoods is under attack, at a time when we have an affordable housing shortage, I just think this particular zoning is nothing more than a pathway to create long-term commercial short-term rentals.”

The commissioners also encouraged Commodore to reapply for the conditional use to open the ice-cream shop instead of the full rezoning. The rezoning, they kept said repeatedly, would be forever.

“The flexibility you’re seeking is exactly what your neighbors are fearing,” said Commissioner Robert Steeg. “To me, your ice cream store is doable by other means.”

Steeg made a motion to overrule the planning staff and deny Commodore’s request, and the commission voted 5-0 in agreement with him. Their recommendation to deny the rezoning will go to the City Council for final approval.

To hear the full debate over the issue, see below: