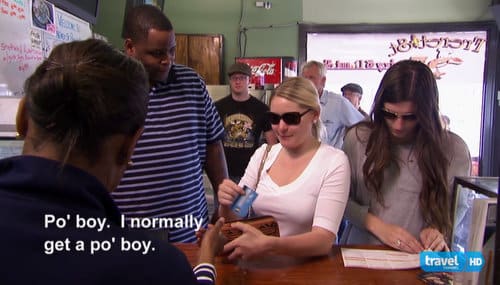 Daym Patterson (left) visits Freret Street Po-Boy and Donuts in 2013 in a segment for The Travel Channel. (via travelchannel.com)

Freret Street Po-Boy and Donut Shop — heralded when it opened in late 2009 as a sign of the corridor’s post-Katrina rebirth — has closed its doors as it struggles to keep up with the continued evolution of the neighborhood.

The poboy shop was among the small first wave of restaurants to open on the corridor after Hurricane Katrina, following Cure, Sarita’s Grill, and Village Coffee (which is also now closed and under renovation as a Starbucks), frequently touted by City Councilwoman Stacy Head as part of a commercial renaissance on Freret. In 2013, its stature had risen to the point that nationally popular food personality Daym Patterson filmed a segment there for his show on the Travel Channel, “Best Daym Takeout.”

Business on Freret was complicated in part by a street project that dragged on for years beyond its original scope, but also by the pressure of a changing neighborhood. Major pre-Katrina businesses, like Freret Garden Center, also sold their land and gave way to newer construction, such as the building that houses the national Halal Guys and Blaze Pizza chains, and even parking became more hard to find as free spaces were converted to paid.

“A lot of the regulars, I didn’t even see them anymore,” said Freret Po-Boy owner Myra Bercy in a telephone interview on Tuesday morning. “I guess some of them moved out of the neighborhood.”

Bercy said she struggled in recent years to make her rent payments, and they continued to go up. By January, her rent would have been nearly double what she originally paid when the business opened, so she closed for good the last week of October.

“The combination of all of that put me in a position where I was not making enough to stay in business,” Bercy said.

Building owner Sam Berman, who bought the property several years after the po-boy shop opened, said the rent increases were outlined in the same lease the owners signed prior to opening.

“The rent went up as the lease called for it,” Berman said. “It shouldn’t have been a big surprise to her. … We wish Myra the best. We certainly tried to work with her. We loved the po-boy shop, but we’re moving forward.”

As for the future of the space, Berman said word is just now beginning to get out that it is available, and he does not know what will be next for it.

“Certainly it’s set up for a restaurant right now, and we’re not opposed for that, but we’re going to look for what’s best for the street and the building,” Berman said.

Bercy said she is unsure whether she will try to open another restaurant elsewhere, as closing the business left her in debt. In the meantime, she said, she believes the city should think of ways to continue supporting longtime small business owners as the economy of New Orleans begins to change.

“The city needs to do something about this, I feel,” Bercy said. “In New Orleans we have a lassiz faire way of doing business, where it makes a little easier for the biz owners dealing with landlord-tenant situation.

“When people come from out of state, they don’t have the same respect for our culture,” she continued. “To a lot of people, the things I did might have meant a lot. But to them, it doesn’t really mean anything. We were just small time.”