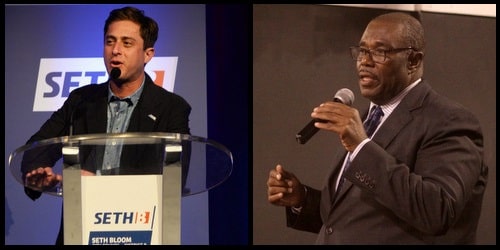 Seth Bloom, left, and Jay H. Banks will head to a runoff for the open District B seat on the City Council. (UptownMessenger.com file photos)

The four candidates who fell short of making the runoff for the open District B seat on the New Orleans City Council all announced their endorsements of the remaining candidates this week, with Catherine Love, Andre Strumer and Eugene Ben choosing Seth Bloom, and Timothy David Ray siding with Jay H. Banks.

Bloom announced the support of Love, Strumer and Ben in a post Tuesday on his campaign website.

“I have gotten to know and respect Eugene, Catherine, and Andre. They are all deeply committed to improving our city and having earned their trust and support means a lot to me,” Bloom said in a statement. “We all want the same things: safe neighborhoods, drivable streets and working drainage. I look forward to working with them on these critical issues facing our city. We all recognize the need for an independent voice representing the citizens of District B, not a political machine.”

Ray made his endorsement of Banks in a long email distributed Thursday at noon, much of which was open criticism of Bloom. Ray said he had met with both men to determine whom he would endorse, but ultimately deemed Bloom “unraveled” and “impulsive.”

“Seth Bloom has habitually displayed a lack of self-restraint, professionalism, respect, and sincerity as he has campaigned for another public office,” Ray wrote in the email. “I am convinced that Seth Bloom is volatile, hostile, and vindictive – the residents of District B deserve better. The City of New Orleans deserves better.”

Bloom released a letter Thursday afternoon that he had sent to Ray on Tuesday. He criticized Ray for seeking to host a forum and tie him to certain issues, according to the letter.

“You however are implying that appearance at your forum and a public commitment to certain special interest’s issues are a requisite for your endorsement,” Bloom wrote. “That kind of quid pro quo is offensive and unethical. It reminds me of the old line, self-serving, corrupt politics that I successfully fought against on the Orleans Parish School Board.”

In a telephone interview Thursday afternoon, Ben said he had originally promised to support Banks as well as Bloom. He became frustrated with Ray’s message, however, and has decided to throw his support firmly to Bloom.

“In every competition, there’s victors and the vanquished,” Ben said. “I think we all have to step aside when we have two people in the runoff.”