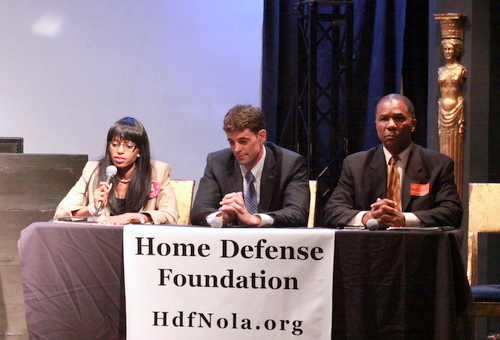 Cycle enthusiast Michael Weinberger — who leads the twice weekly rides for the Crescent City Cyclists Club and is also founder of the Home Defense Foundation — is not your average citizen activist. A retired lawyer from Brooklyn, New York who specialized in mechanical engineering liability, Weinberger always held distinct views on how government should operate. “Citizens should try to make a difference,” said Weinberger who moved to New Orleans in 2007 after first visiting here years earlier on a month-long motorcycle trip.

With strong views on limited government, taxpayer rights, personal freedom, government responsibility and self defense, Weinberger originally decided to use his time and abilities to help his friends and neighbors in 2013 when Marigny homeowner Merritt Landry was arrested for shooting an intruder who was trying to break into his home at 2 a.m. Landry said he had a pregnant wife and a baby to protect. The Home Defense Foundation sprung to life after the arrest.

“Homeowners and taxpayers must step up our activism and get the right to defend ourselves,” Weinberger explained. “I did not own a firearm when I moved to New Orleans. But by 2011, I realized crime was so bad the if you didn’t protect yourself, the chances of a police officer being close enough to actually protect you if a criminal was about to attack was close to zero. Basically, we have to defend ourselves,” said Weinberger.

Weinberger quickly reached out to like-minded individuals and formed a citizen lobbying, outreach, and firearm safety education network that three years later has 700 active members and a Board of Advisors including State Rep. Cameron Henry, State Rep. Julie Stokes, and former State Sen. Elbert Guillory, among others.

The Foundation became active on the Baton Rouge legislative front in 2014 and was a driving force in the rewriting of self defense, home defense and anti-carjacking legislation. Thereafter, Weinberger was invited to attend the new legislation’s signing with Governor Jindal.

In 2016 they fought legislation that would have made it illegal to carry a defensive firearm on government owned land used for recreational purposes. In 2017 the supported the Castle Doctrine which presumes a homeowner can use a firearm as a legal self defense measure during a home invasion.

“I’m not an insider baseball guy,” said Weinberger. “On the contrary, my friends and I work at the citizen volunteer grassroots level. We advocate that neighbors teach neighbors about home and self defense and that we should organize so that our voices are heard.”

The Foundation also had contact with three mayoral candidates – Desiree Charbonnet, Michael Bagneris, and Troy Henry. Judicial candidates such as Nicole Sheppard have spoken at their meetings, which now draw up to 100 attendees each month.

Firearms safety is an important component of every home defense class the group teaches, all of which are free. The classes, which are designed for people with little or no experience with firearms, are held in Arabi.

The number of people who own personal firearms is growing every day. A firearm is only one of many weapons people focused on committing violent crimes can choose from. Citizens want to be safe and will protect themselves, especially if police cannot. Organizations like the Home Defense Foundation provide much needed education and training at no cost to participants. “It is important for New Orleans elected officials to see that our members – the homeowners and taxpayers of Orleans Parish – are organized and ready,” concluded Weinberger.

Dozens of local Republican heavy-hitters turned out last night at the home of New Orleans GOP leader Jay Batt and his wife Andree to support New Orleans lawyer and businessman Louis Gurvich in his bid to be elected Chairman of Louisiana’s growing Republican Party. Running against three other candidates who he calls “nice people”, Gurvich hopes to succeed current LAGOP Chair Roger Villere who is retiring after many years.

Although only the 225 members of Louisiana’s Republican State Central Committee are eligible to vote in the election – which is expected to be held in February, 2018 – Gurvich has already met with elected officials and key stakeholders in more than thirty-five parishes and expects to visit the remainder soon.

“In every corner of the state, people want to have input as to the future of the Republican Party in Louisiana,” said Gurvich. So far this week, he has met with elected officials in Mandeville and Lafayette and attended several fundraisers. 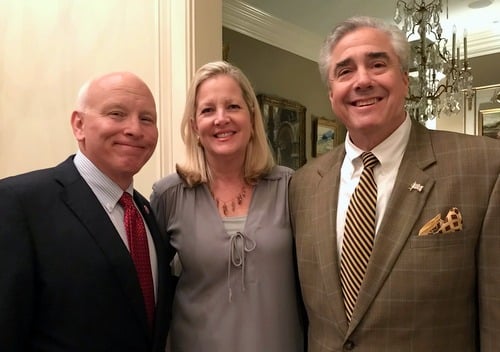 Gurvich said he was motivated to run because of the overall program of taxes that Governor John Bel Edwards supports, some of which Gurvich considers to be “very anti-business.” “At the end of the day, you must remember that the Republican Party is the last remaining bastion, the national political organization that actually believes that capitalism is good and the entrepreneurial spirit works, creates jobs and does wonderful things,” Gurvich told the crowd gathered.