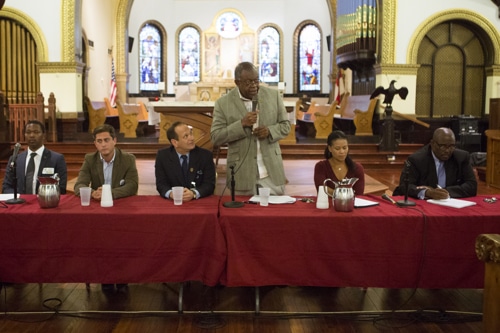 All six City Council District B candidates said they’re against a new stormwater management fee proposed by Mayor Mitch Landrieu to help pay for improvements to the city’s troubled drainage system, though most proposed again adding City Council oversight to the Sewerage and Water Board Commission.

Candidates touched on stormwater infrastructure, public safety and short-term rental issues at a forum Tuesday evening hosted by several Uptown neighborhood associations. Most candidates argued for more transparency from the S&WB commission – especially in light of the August flood – though they each had different ideas on how to move forward.

Catherine Love, a doctorate of veterinary medicine and environmental conservationist, said city officials need to control the composition of the Sewerage and Water Board committee and establish specific criteria for service. Stakeholders – S&WB customers – must be represented on the committee, Love said, in order to provide transparency.

The S&WB was initially intended to incorporate other towns, but that idea never came to fruition, Love said. Dissolving the current system and incorporating it under city rule is the best – if loftiest – option.

Love said S&WB’s current budget should be monitored for efficiency while staff look for other avenues to save money.

“We’re not getting the services of what we pay now. It makes absolutely no sense to give them more money,” she said. 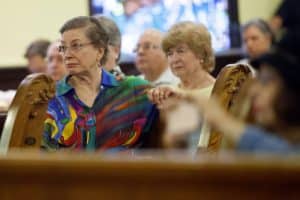 Eugene Ben, architect, pushed for a committee articled under the City Council and mayor to provide transparency to taxpayers. Everyone on the committee should have stormwater management experience. As custodians of the city, the council should oversee the stormwater committee, Ben added.

“We should always make sure this specific entity is at the behest of the people,” he said.

Ben suggested clawing back resources from city departments with surpluses rather than enabling a new stormwater fee, thus limiting the burden on taxpayers.

Councilmembers should have a much greater say in the accreditation and selection of the board, said Timothy David Ray, musician and educator. Three city councilmembers used to sit on the S&WB’s commission before a public vote reorganized the board. Those councilmembers provided public oversight, which is once again needed on the board, he said.

“There’s really no one who can have one final word except for the mayor,” Ray said.

Rather than creating a stormwater fee, Ray suggested looking into federal grants to repair the city’s aging pumping equipment. He also said the city should start planning to replace the decades-old system in the next 40 years.

Councilmembers should serve as a watchdog to the commission, especially given the commission’s apparent inaction repairing broken pumps, cleaning catch basins and performing other tax-funded functions, said Jay Banks. The former staffer to two City Council members said the commission has money to manage the city’s pumps and power turbines, but the recent flooding shed light on the system’s ineptitudes.

Taxpayers have paid their fair share, Banks said, but haven’t gotten the services requested in return. Until there’s some light on where and how the commission’s money was spent, Banks said he doesn’t support giving S&WB another dime.

“They haven’t returned any of the money to us, so where is the money?” Banks asked.

Seth Bloom, who served two terms on the Orleans Parish School Board, said S&WB should be rolled into the city’s Department of Public Works. The lack of transparency and a seeming lack of efficiency should push council to require stormwater management experience of new S&WB leaders, he added.

Bloom told the crowd that a new stormwater tax would not solve S&WB’s issues, but working with state and federal agencies to figure out where the commission’s money goes is a step forward.

“New Orleans has a problem with a lot of governmental agencies being dysfunctional,” Bloom said. 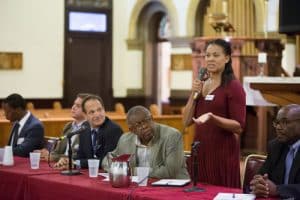 “Action Andre” Strumer, a block captain for his street in the Irish Channel, said filling the 300 empty positions available with the S&WB would help solve unemployment and some of the commission’s woes. Since S&WB employees cannot work overtime, equipment repairs take longer and end up costing the city more. The whole system needs to be overhauled, Strumer said.

“We have to take care of our own catch basins and not throw the grass and yard clippings in there,” he said.

The panel was moderated by Robert Morris, of Uptown Messenger, and Stephanie Grace, with The New Orleans Advocate.

All six candidates are slated to participate in another District B forum, this time hosted by a collaboration of Greater Mid-City organizations. That forum is scheduled for Thursday, Sept. 28 form 6- 8 p.m. at Tulane Tower, 2601 Tulane Ave.