On the heels of reports that short-term rental advocates plan to seek looser regulations on AirBnB hosting and similar services, affordable-housing advocates convened a meeting Wednesday night to announce their own policy goals restricting the same services — setting up a major election-year fight for the next mayor and City Council.

The Alliance for Neighborhood Prosperity — one of the foremost advocacy groups for short-term rentals — sent out an email in August describing the goal of electing City Council candidates friendly to its next policy goals, according to a recent article in Gambit. Those goals include as lifting the ban on AirBnB in the French Quarter and increasing the number of permissible nights under a “temporary” license (originally described as the Mardi Gras or JazzFest-type of license, allowing homeowners to rent out their whole home while they leave on vacation) from 90 days to 180 days. Meanwhile, on Wednesday, the Alliance’s president told The Times Picayune that he plans to challenge the city’s enforcement process against short-term rental operators.

On Wednesday night, the Jane Place Neighborhood Sustainability Initiative held a discussion at the Mid-City Branch Library of the effect of short-term rentals so far. While short-term rentals are often marketed as a way for individual homeowners to supplement their incomes and possibly even help with housing costs, Jane Place program manager Breonne DeDecker said the system created by the City Council is rife with abuse that accelerates the inflation of home values in low-income neighborhoods near tourist areas.

Increasingly, homes near tourist areas are being bought specifically for the purpose of converting them to AirBnBs, and a single person might masquerade as the “occupant” of numerous homes that are rented out all the time — and some companies even hire people to play that role, creating a “McDonalds of short-term rentals,” Dedecker said. Property owners are also increasingly asking for zoning changes on homes from residential to business zoning to fit into the third category of short-term rentals, commercial, which allows more tenants and can be rented year-round.

“These are professionals,” DeDecker said. “A lot of them don’t live in New Orleans. They are people who are taking advantage of a system that is allowing them to maximize a huge windfall of profits.”

Part of the problem is the city’s notoriously lax enforcement, DeDecker said — AirBnB still has 2,000 more listings in New Orleans than permits have been issued for six months after legalization — but a bigger issue is the poor data that the city requires from the platforms. For example, the data from competing online platforms is not compared against each other, so a listing could easily be rented 90 days on AirBnB and then 90 days on HomeAway.com, she said.

The effect, DeDecker said, is that the number of places for New Orleanians to live is being reduced — some long-term renters are being evicted to make way for short-term rentals — and housing prices near tourist areas are rising dramatically as the former single-family homes are surreptitiously converted into lodging places. After the Central Business District, Central City now has the second-highest number of whole-home rental listings on AirBnB, and the Seventh Ward is third, she said.

To reduce the trend, Dedecker described a series of policy goals, including:

Maxwell Ciardullo, policy analyst for the Greater New Orleans Fair Housing Action Center, said that placing more of the enforcement burden on the platforms will actually reduce the amount of tax money that has to be spent on it by the city.

“The platforms have to participate in that enforcement,” Ciardullo said.

Many of the candidates have noted that short-term rentals were banned outright in the French Quarter, and said other neighborhoods should be able to make a similar self-determination. While the city does not currently have a process to allow that for other neighborhoods, the policy has had a surprising effect: Residential rents are going down in the French Quarter, said Meg Lousteau of the Vieux Carre Property Owners and Associates.

DeDecker declined to name specific candidates for mayor and City Council that should be supported (unlike the Alliance for Neighborhood Prosperity, which identified District C councilwoman Nadine Ramsey and District A candidate Aylin Maklansky as allies), but did briefly touch on their answers to a survey about housing issues. She did, however, rebut the notion that the current AirBnB laws were the result of a public process — the public process was held through the City Planning Commission, but then Mayor Mitch Landrieu’s office wrote its own 11th-hour legislation with the AirBnB advocates that the City Council then adopted.

“This was not a compromise,” DeDecker said. “This legislation was written between the administration and the companies.”

Other cities are taking much stricter stances against short-term rentals, she said, requiring more data from the platforms and limiting abuses of the system.

“Whenever you hear this phrase that New Orleans is the leading edge, no, we’re not,” DeDecker said. “What we did was we created a permitting system by which it is very easy to get permits and very easy to make some level of taxation happen, which is very different from making a good public-policy outcome for residents.” 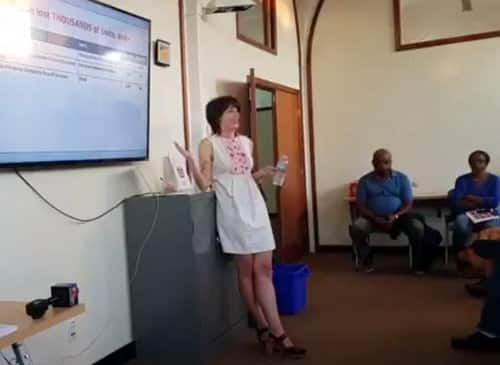