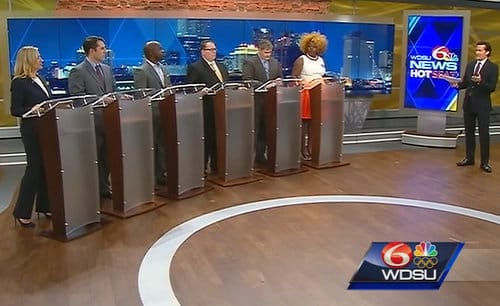 Moderator Travers Mackel (right) poses a question to the six candidates running for the open District A seat on the City Council. (still image from YouTube video)

One candidate for the open District A seat still hasn’t decided whether Confederate statues should be removed in New Orleans, and some question whether the New Orleans Police Department is actually understaffed. Another candidate thinks pothole repairs should halt until underground drainage problems are fixed, and one thinks the Sewerage & Water Board should be abolished altogether.

Thus far, barely a month after the qualifying period for City Council elections, candidates’ public appearances have largely been introductory affairs, allowing the public to get acquainted with the people running. In a 20-minute debate on WDSU, moderator Travers Mackel managed to elicit some answers that drew out more substantial differences from the six candidates seeking to fill the open District A seat.

The sharpest contrast was on the quickest question, when Mackel asked the candidates for a “yes or no” answer on whether they would have voted to remove several Confederate and white-supremacist monuments from around the city if they had been on the City Council, as current District A Councilwoman Susan Guidry did. Five — Aylin Maklansky, Tilman Hardy, Dan Ring, Drew Ward and Toyia Washington-Kendrick — all said they would have supported it.

Giarrusso, however, said he did not know.

“I just don’t think I have enough information to answer that question,” Giarrusso said. “The answer really is about the process that was involved. … I think it’s important that people are frustrated what happened in the process.”

Mackel pressed Giarrusso twice more for a yes or no, and Giarrusso said both times that it was “not fair to prejudge” what he would have done on the council.

Moving on, Mackel asked the candidates if they supported more oversight of the Sewerage & Water Board after the failures that have come to light following the flooding Aug. 5. Most of the candidates did — Maklansky argued that the City Council should be given its seats back on the board, for example.

Ward, however, said that the flooding was not the result of the Sewerage & Water Board.

“We’ve been taken for a ride. The Sewerage & Water Board and the pumps had nothing to do with the flooding last week,” Ward said. “The flooding was caused by clogged and paved-over catch basins and the continued use of impermeable paving throughout the city by mayor the City Council. The water never even got to the pumps, whether they were working or not.”

Even so, the agency should be abolished, Ward continued.

“The Sewerage & Water Board should simply not exist,” Ward said. “We have over 200 independent entities in New Orleans, independent fiefdoms, mostly appointed, un-elected officials, most of them political donors of the mayor that are appointed to different seats.”

When asked about crime, most of the candidates pointed to the need for more officers, such as Giarrusso pointing to the dramatic decrease in homicide detectives. The candidates generally called for a mix of community policing, economic development and social services to help reduce crime.

Hardy said suggested that he would be disinclined to raise the budget for the police department. If waste is eliminated from the department, Hardy said, the city already has the money for all the officers it needs.

“In many other municipalities, the number of officers they have are far less per capita than we have here and I believe there are organizations that can fill the gap, like the Peacekeepers and the CeaseFire program,” Hardy said. “If there was more funding for those programs, I believe they could work together to eliminate our violence problem in the city.”

Ward also questioned the need for more officers or higher salaries, and called instead for redeployment.

“Pay is not the problem, and neither is the number of police,” Ward said.

Most of the candidates also agreed that road-maintenance money should be managed better, with Ring and Maklansky both suggesting that roadwork could help provide jobs to young people and Washington-Kendrick calling for more “pothole killer” trucks. Ward, however, reiterated that the city should switch to permeable paving and Hardy cautioned against focusing on fixing potholes.

“Not without the drainage first,” Hardy said. “We need to put all of our resources into developing a feasibility study to deeply understand what is happening with our drainage before we address our streets.”

To watch the debate in full, see below: