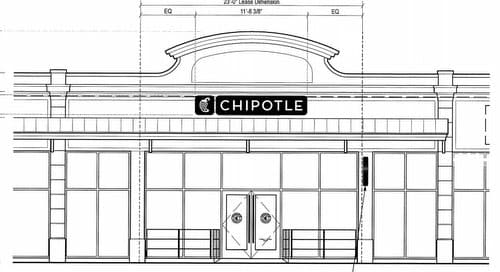 (via City of New Orleans)

As Chipotle prepares for an October hearing date on its request to open a location on Magazine Street in the Garden District, the chain has convinced city planners that its burrito shop should be considered a standard restaurant rather than fast food.

Chipotle requires a conditional use from the City Council to change the former Radio Shack retail space at 2801 Magazine Street (the same building that has a Starbucks on the corner of Washington Avenue) into a food-serving establishment. City planners had originally rejected Chipotle’s arguments that it should be considered a “standard” restaurant instead of fast food, pointing to design elements such as the large mounted ordering menu and the condiment stand.

In a letter dated Thursday, Aug. 17, however, Safety and Permits director Jared Munster wrote that, “upon full consideration of the proposed restaurant use,” his department had determined Chipotle to be more like a standard restaurant after all.

“Specifically, the proposed use … will be a uniquely designed space with custom signage,” Munster wrote. “Employees will provide bussing of tables, and primary menu items are not prepackaged or pre-prepared.”

The project will include an “exterior covered dining patio” at the front, but will not encroach on the sidewalk, the application states.

The hearing before the City Planning Commission is set for Oct. 10, according to the planning documents.