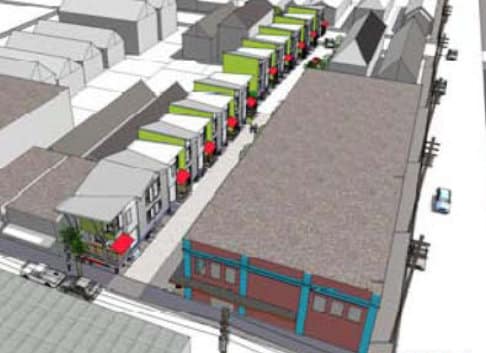 A rendering of the “Freret Mews” townhome project in the former Publiq House parking lot. (via city of New Orleans)

A row of nine two-story townhomes proposed for construction in the parking lot of the former Publiq House building has drawn strong criticism from city planners, and the developers have asked for an additional month to prepare a response before seeking permission for the project.

A development company called DensityBump LLC, headed by Lawrence Linder and Richard Ehret, is proposing the “Freret Mews” project on the Neighborhood Housing Services property that spans the block between Freret and Lasalle streets alongside Cadiz Street. The buildings would have ground-floor parking with two-bedroom, two-bath townhouses above, and the project would maintain a driveway between the Publiq House building and the new homes, according to the proposal sent to the City Planning Commission. 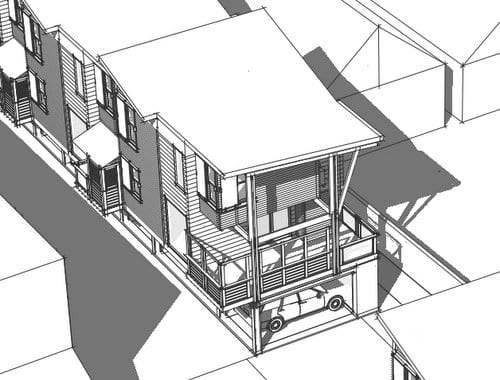 A closer view of one of the townhouses, showing the outdoor deck and parking area underneath. (via city of New Orleans)

The original plan for the project called for 10 townhomes, but developers reduced it to nine following neighbors’ concerns about density. Though the townhomes will be sold, not rented, some neighbors worried that the new owners would simply use them for AirBnB rentals.

“I strongly oppose the construction of any of these townhouses,” wrote Jena Street neighbor Annie Jane Laurence. “I see this as out-of-town developers looking to make money off my neighborhood.”

Business owners in the blocks around Freret voiced support for the project, however, according to the developers’ notes from a neighborhood meeting in April.

“Thank you, Lawrence, for coming up with a creative way to beautify an ‘ugly’ parking lot and make it useful,” wrote Ross and Ria Turnbull of Piccola Gelateria. “We support this project.”

The project would be split into two phases, with each taking about a year to build and construction starting on the second about six months after the first, developers told neighbors. First, however, the project needs permission from the New Orleans City Council and a hearing before the City Planning Commission.

The project was slated for hearing before the City Planning Commission on July 11, but the city planning staff had issued a recommendation to reject the project. While townhomes could be consistent with the Master Plan, this particular project is “out of scale and markedly different” from the rest of the neighborhood, the city planners wrote.

“The proposed footprint and arrangement of the townhouses, with a sideways orientation and with parking areas as the prominent ground-floor development feature, is strikingly different from the predominant development pattern in the neighborhood,” the planners said in their report. “Townhouses typically are set to the street with the main entry andwindows oriented toward the street frontage as well. Parking, if provided, is typically concealed from the street by the building mass and positioned in the rear of the site.”

Though the total amount of parking is expected to stay approximately the same, the townhouses could combine with the unknown future use of the Publiq House building to negatively impact the neighborhood, the planners concluded.

“The proposed townhouse development could impact the ability for any future commercial occupant of the existing structure on the site to provide its necessary parking,” the report states. “Without a broader understanding of the usage of the entire development site, it is difficult for the staff to make an informed prediction of impacts.”

Based on the report, Linder told commissioners at the July 11 meeting he needed more time to prepare a response.

“It’s a large, comprehensive report, and we need to respond to it, since we don’t agree with anything the staff determined,” he said.

The commission unanimously voted to postpone discussion of the Freret Mews project until their Aug. 8 meeting.