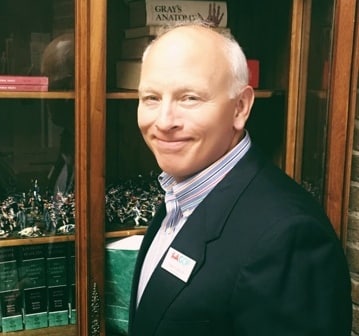 New Orleans business leader Louis Gurvich, a long-time member of the Orleans Parish Republican Executive Committee and the Republican State Central Committee, wants to be elected chairman of Louisiana’s Republican Party, now 900,000 members strong. If elected, Gurvich will succeed current state party chair Roger Villere, who is retiring after overseeing the Republicans’ rise to dominance in state politics over the last 14 years. Villere is the longest-serving state GOP chair in the U.S. and is vice chair of the Republican National Committee.

“When Roger first became chair, the Louisiana Republican Party was a much smaller, less powerful organization,” said Gurvich, who also previously served on the Orleans Parish Board of Election Supervisors. Secretary of State Fox McKeithen was the only Republican statewide elected official. Today, Gov. John Bel Edwards is the only statewide elected Democrat. The number of parish-level and regional Republican elected officials has also grown significantly.

Filling Villere’s shoes won’t be easy, says Gurvich. “Roger did a yeomen’s job of building Louisiana’s Republican Party one voter at a time. I want to take the LAGOP to the next level by increasing membership to 1 million voters and developing a strong financial base to fund future programs and services, like a state-wide voter registration drive,” explained Gurvich. He would also like to strengthen ties between the parish and state committees, the Republican women’s clubs, and the Pachyderm clubs.

Gurvich’s desire to be the LAGOP’s top leader might seem an unusual move from his weekday responsibilities as president of the Uptown-based New Orleans Private Patrol, but the private security business is in Gurvich’s blood. A third- generation entrepreneur, Gurvich’s family came to Louisiana in the late 1920’s when J. Edgar Hoover, the young director of the Bureau of Intelligence — later known as the FBI — personally transferred Gurvich’s paternal grandfather to the city. Gurvich received multiple degrees in business and law from UNO, Tulane University and Loyola Law School and entered the 87-year-old family business in 1991.

“The private security industry is very important to the safety of our citizens, especially when you consider that there are two or three times as many security officers as police officers,” said Gurvich. NOPP employs 400 part and full-time officers, many of whom are licensed to carry weapons.

“Helping New Orleans become a safer city is what makes the demanding job and 24/7 responsibility worthwhile.” Gurvich believes that his industry can be part of the solution to the city’s crime problem. “I look forward to working with our new mayor and city council to improve public safety,” he continued.

Gurvich is proud of the leadership role U.S. Senator Bill Cassidy is playing in the development of a replacement for the Affordable Care Act, also known as Obamacare. “Our health care system must change,” said Gurvich.

Also in the running for the position of LAGOP chairman are Charles Buckels of Lafayette and Scott Wilfong of Baton Rouge. The election will be held in early spring, 2018.

COUNCILMEMBER STACY HEAD WILL BE MISSED

The public can always count on Councilwoman Stacy Head to drill down on the issues and ask probing questions. Head’s appearance at qualifying last Friday to remind voters to hold the current crop of candidates accountable was classic Head. It would not be surprising if Head researched the newest contenders to ensure each met the basic tax and residency requirements. The deadline is rapidly approaching for legal challenges that could remove candidates from the October ballot.