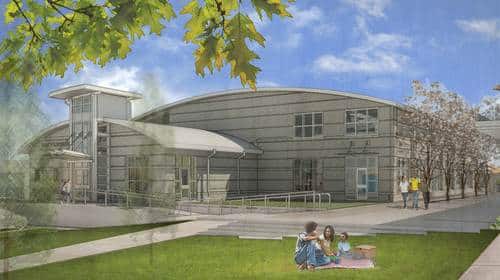 (rendering via City of New Orleans)

Just two months after announcing the start of construction on the new headquarters for the NOPD Second District in Gert Town, Mayor Mitch Landrieu and other officials returned to the site Friday morning to break ground for the new $6.7 million pool and community center that will be built next door.

The 15,000-square-foot Gert Town Natatorium at 3411 Broadway Street will include a “six-lane, 25-yard indoor competition swimming pool and … men’s, women’s and a family locker room area as well as a snack bar,” the city announced. It will share a “community plaza” with the police station on the site as well, and is expected to open in spring 2018.

“Community pools are critical to keeping our kids off the streets and providing them a place to come together,” said Mayor Mitch Landrieu afterward.

The facility will replace the previous Gert Town Natatorium, which was badly damaged in the flooding after Hurricane Katrina and demolished in 2011. District B City Councilwoman (and mayoral candidate) Latoya Cantrell — who kept the natatorium a priority during discussions about moving the Second District police station to the site — praised the commencement of construction.

“Gert Town deserves quality community institutions, and this groundbreaking is the culmination of the hard work required to get this done,” Cantrell said.

The $6.7 million for the facility came from a combination of FEMA funds, state Homeland Security money and city bonds.

“This modern and improved aquatic facility will restore lost recreational services and will benefit not only Gert Town residents but the community as a whole,” said Mike Womack, director of the state FEMA recovery office.