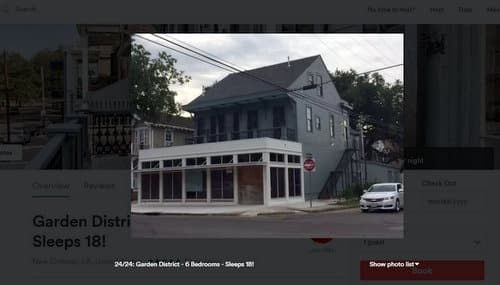 A screen shot of a five-unit AirBnB listing at the corner of Prytania and Josephine. (via airbnb.com)

In the Federalist Papers, James Madison famously ruminated on the necessity of government.

“[W]hat is government itself, but the greatest of all reflections on human nature?” Madison asked rhetorically in Federalist No. 51. “If men were angels, no government would be necessary.”

It is because men are not angels (indeed, far from it) that we need the controls imposed by government. Even those laws that are overly restrictive and burdensome usually find their origins in the inability of citizens to do the right thing.

Case in point: Across the street from my home in the Lower Garden District is the old Zara’s Supermarket located at 2042 Prytania Street. By early 2014, Zara’s had fallen on hard times. The business folded and the tenants in the upstairs apartments moved out.

In July of 2014, the Zara’s building was sold to a corporate entity owned by Robby and Liz Blum. The following March, the Blums met with the Coliseum Square Association to announce plans to renovate Zara’s and open up another full-service grocery in the location. They came up with a name – “Garden District Grocery” – and explained the concept in relative detail.

Renovations, however, went slowly. The planned grocery never opened, although by the beginning of 2016, the major work appeared to be completed.

It was at that time I began to notice what the Blums had done with the five apartments in the upstairs. Instead of leasing them, they began hosting them as short-term rentals on AirBnB.

I was not pleased with this development, but didn’t make a stink. Even when rowdy tourists would hang around on the upstairs porch into the wee hours on weekends, I avoided confronting anyone about it. After all, who wants to antagonize their neighbors?

Well, the Blums did. Despite the Blums’ promises of opening up a new grocery themselves, lease signs popped up in the storefront in mid-2016. The Corporate Realty listing pitches the possibilities broadly: “Convenience Store, Mixed Use, Restaurant.” This is certainly not what was pitched to the Coliseum Square Association.

The Blums also ostensibly decided that they could control all the parking adjoining their property, and to Hell with the people that actually live nearby. Despite having two freight zones that have not served any useful purpose in over three years, the Blums also decided that an old curb cut adjoining their building was, in fact, a “driveway,” and began demanding that people be ticketed who parked along it.

I wrote a column about the problem earlier this year when someone else’s vehicle was ticketed. Afterwards, I received two tickets myself. I complained to one of the Blum’s workmen who was renovating the property next door. He brusquely admitted to calling parking enforcement and boasted that they could have anybody ticketed due to what he described as their political clout.

I complained to Liz Blum directly, but received the brush off. Ultimately, I contacted the head of parking enforcement and explained the situation. The tickets were dismissed.

Around this same time, the city’s short-term rental law went into effect. On May 15, 2017, the Blums applied to the city for five unrestricted commercial short term rental permits. The city rejected the applications because the property is zoned HU-RD2, a residential classification. The applications were then converted to temporary permits, which are only valid for a total of 90 days per calendar year. Based on my personal observation of guests regularly entering and leaving and a review of their availability on AirBnB, it would appear that the units have likely already exceeded the 90 day limitation — yet they continue to be regularly occupied.

Whether due to their short term rental application or some other factor, the Blums were tipped off to the fact that they lacked any kind of commercial zoning. On May 25, 2017, they filed to begin the process of applying to have the zoning changed to HU-MU.

Just this past Tuesday, Nicole Webre, a consultant representing the Blums, appeared before the Coliseum Square Association to make the pitch for the zoning change. Webre claimed that the intention was still to have a grocery, and that the broad HU-MU classification was necessary because it offered the “most potential in terms of allowing residential on the top floor and commercial on the bottom floor.”

The Coliseum Square Association was skeptical, but still voted in favor of a motion endorsing a change to a more restrictive commercial zoning classification, HU-B1. Another public meeting will take place on site on June 26, 2017 at 6:00 p.m.

Of course, the idea that the Blums want to offer “residential” in the upstairs is belied by the fact that they’re using the old apartments as AirBnB rentals. Moreover, there does not appear to be any particular reason why the plan for a grocery would pan out. The space is presumably slated for lease to whoever can afford the rent.

I’m on the record as being generally opposed to restrictive zoning, but I also understand that the foregoing experience is part of where the drive for strict land use controls arises. When property owners act in a generally un-neighborly manner, it’s natural to prefer that they be constrained, especially when they come to the city hat in hand.

It’s also human nature to be selfish. I won’t begrudge anybody who wants to make the most economically advantageous use of their property. However, that drive has to be tempered with a healthy regard for those around you.

It would be easier for both myself and my other neighbors if the Blums were angels; then they could be trusted to act properly without supervision. Regrettably, angels are surely lacking here.

14 thoughts on “Owen Courreges: When a grocery store becomes an AirBnB”