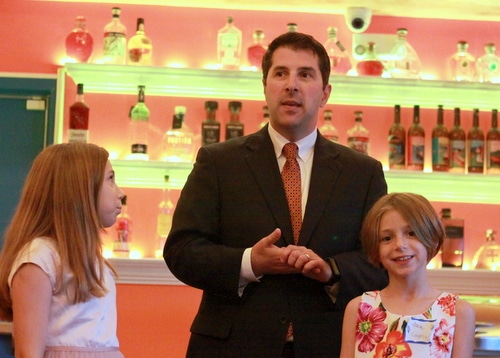 Joe Giarrusso, the attorney and neighborhood leader running for the District A seat on the New Orleans City Council, drew dozens of supporters to a Lakeview restaurant Wednesday evening for a fundraiser as his campaign and others around the city begin to heat up.

Giarrusso, 40, is a former president of the Lakeview Civic Improvement Association, and told about 80 supporters on at El Gato Negro restaurant that his experience dealing with neighborhood issues is part of what led him to seek a seat on the City Council.

“When I was neighborhood association president, I felt like I heard a lot of complaints about the government not being responsive,” Giarrusso said. “I was surprised to hear that, but as I’ve been campaigning, I’ve been hearing a lot about it. That’s where I think having young, fresh energy come in can make such an incredible difference.”

The District A seat that Giarrusso is seeking will be open as incumbent Susan Guidry is term limited. Other candidates who have said they will seek the District A seat are attorney Mark Vicknair and Carrollton neighborhood activist Drew Ward.

Giarrusso’s fundraiser comes as attention to this fall’s City Council races begins to increase. In neighboring District B — also expected to be an open seat because of incumbent LaToya Cantrell’s mayoral bid — two candidates announced kickoff dates Wednesday morning in the coming weeks for their campaigns, Jay Banks and Seth Bloom. One of those, Bloom, even attended Giarrusso’s event as well.

So early in the campaign season, Giarrusso did not dive deep into policy specifics in his address at the restaurant. He did, however, cite the work of the independent Bureau of Governmental Research (where he has been a board member) as he talked about his hope that new leadership can continue making the city more efficient.

“Here we are in a city where we have a great deal of economic opportunity. We have a chance to reduce crime. We have a chance to fix our streets,” Giarrusso said. “I think there’s one critical message as I look around this room tonight: We can all be successful. We have a bright future, and we’re all going to get there together.”

The election is Oct. 14, and the formal qualifying period for candidates to sign up is July 12 through 14.