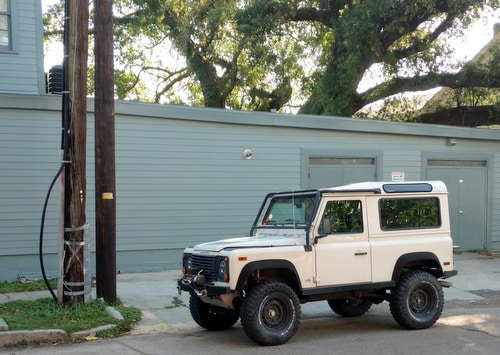 See that bright orange parking ticket on the window? The city says this Land Rover is blocking a driveway — even though the driveway has long since been replaced by the building addition instead. (photo by Owen Courreges for UptownMessenger.com)

You won’t find many people in New Orleans who have much good to say about the Parking Enforcement Division of Public Works. Meter Maids seem to generate a never-ending litany of complaints, the vast majority of which appear well-founded.

A couple of weeks ago I was confronted with a prime example of this phenomenon. I noticed an old Land Rover parked across the street with a ticket in the windshield. Since the Land Rover was legally parked, I was curious what the ticket said.

The ticket indicated that the vehicle was being cited for blocking a “ramp” or “driveway.”

The problem was, there was no wheelchair ramp or driveway to be blocked. There was only an old curb cut adjoining the sidewalk. Any driveway had been very obviously blocked by a building addition. Without providing any means of vehicular ingress or egress, the curb cut could not, legally, be a “driveway.”

After asking around, I determined that this is not an uncommon tactic of meter maids. Others also reported receiving bogus tickets for blocking “driveways” that were really just old curb cuts.

The problem is even worse than just writing tickets for non-violations. Last year, WDSU investigated reports that tickets were being issued against incorrect vehicles. In at least one case, a citation was issued to a person who wasn’t even in the city at the time.

The WDSU report drew the attention of New Orleans Inspector General Ed Quatrevaux. A subsequent report by his office discovered that nearly 9,000 parking tickets were being issued each year that were facially erroneous. Goodness knows how many other tickets are issued each year where the errors are not so obvious.

It isn’t enough that the city offers an opportunity to challenge a citation. First of all, hearings for parking tickets aren’t specifically scheduled, and you can end up waiting hours to be heard. For people who can’t afford to take half a day off from work, it’s just easier to pay the parking ticket.

Secondly, the hearings themselves are a farce. The hearing officers serve as both judge and prosecutor, looking for any excuse, imagined or otherwise, to uphold bogus tickets.

Unfortunately, the city views parking enforcement as a cash cow and therefore has little incentive to reform a broken system. Instead, the city has actually been doubling down. Over the past decade, metering hours have increased, fines have been increased, and more meter maids have been hired.

The final insult came this January, when it was announced that meter maids would begin ticketing for brake tag violations again, an unpopular practice that was abandoned in 2004.

Chris Lane of New Orleans Citizens for Fair Parking was understandably incensed at the news that Mayor Landrieu was once again making parking enforcement more onerous. “I think this is just another example of this administration nickel-and-diming the people who live here and that do the work here, and who have to pay the bulk of the taxes.”

HB 597 is not some radical step. Most states do not require periodic vehicle safety inspections, viewing them as ineffectual and overly burdensome. Mississippi, for example, eliminated its regular inspection requirement in 2015.

Thus, in a time when vehicle safety inspections are going the way of the dodo, Landrieu has seen fit to utilize violations to generate additional revenue under the guise of improving safety. This, in spite of the fact that there is no evidence that the cursory inspections have any impact whatsoever on safety.

Instead of reigning in our meter maids and holding them to account for writing bad tickets, we’ve been hiring more of them and increasing their authority. That’s bad public policy, the effects of which will be felt beyond the parking scofflaws.

13 thoughts on “Owen Courreges: New Orleans will gladly give you a parking ticket for blocking a driveway that doesn’t exist”