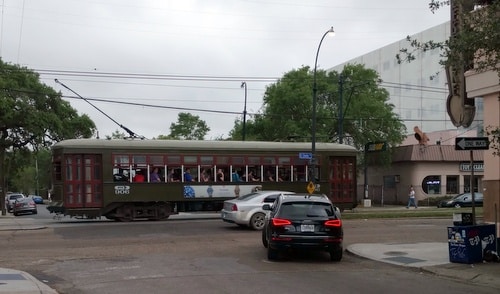 No stop sign on St. Andrew at St. Charles Avenue (photo by Owen Courreges for UptownMessenger.com)

Although I am trying to seize the mantle of New Orleans’ resident anti-government curmudgeon, I generally try to avoid playing chicken little. However, it is becoming increasingly evident to me that local government is incapable of providing certain very basic services. If I didn’t know any better, I’d say that the city has simply run out of money.

Earlier this year, I wrote a column in which I pointed out that the city was doing an extremely poor job of replacing street signs. Now, months later, things have become much worse.

Too many times, I’ve come to an intersections where signals and street signs were missing or broken. Although poor maintenance is practically a hallmark of New Orleans governance, lately it has grown into something else.

It’s as though the city has just given up.

I’m starting to fear that Public Works is completely defunct. I would half-expect to find a rusty padlock on the door adorned with cobwebs, with an adjacent sign ominously reading “CLOSED FOREVER.” With the exception of major projects, like repaving major streets, work is at a standstill. Basic maintenance is falling by the wayside.

This Sunday, I decided to chronicle the evidence. I drove around the streets surrounding my home to those intersections with particularly poor signage that could, if not remedied, be the cause of major accidents. My brief efforts yielded the following photo essay. 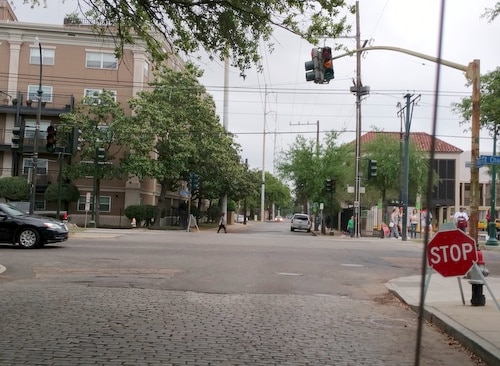 This is a picture of the intersection of Felicity Street and St. Charles Avenue taken from the lakeside of Felicity. You’ll note that the traffic signals are not working and temporary stop signs have been placed on both streets. With the presence of the St. Charles streetcar and a four-lane boulevard, it’s a particularly dangerous location to be lacking a functioning traffic signal.

Alone, this would not merit much attention; traffic lights go out all the time, and sometimes they may take a few days to repair.

However, this particular stop-light has been out since before Mardi Gras. Yes, it went out in the middle of February, well over a month ago. There has been no indication, other than the placement of temporary stop signs, that Public Works is doing anything about it. What’s going on?

Next — featured in the photo at the top of this column — we see the intersection of St. Andrew and St. Charles Avenue from the lakeside, just two blocks over from the previous photo. Do you see what’s missing? If you said “a stop sign,” you’re absolutely correct! There is no stop sign notifying drivers on St. Andrew, a one-way street, to stop at St. Charles, a two-way boulevard with a wide neutral ground featuring streetcar service.

Now, I’m sure my loyal readership is completely aware of the fact that cars on all side-streets must yield to traffic on St. Charles. However, those unfamiliar with the city, like tourists, may simply drive blithely into a wall of traffic in the absence of a blasted stop sign.

It is also worth noting that, in Louisiana, political subdivisions are open to tort suits for negligent road design and maintenance, meaning that if somebody is killed in a major accident because a stop sign isn’t replaced for an extended period, the city will wind up footing the bill (eventually) for the inevitable wrongful death lawsuit.

Such a verdict would probably be in the millions. Conversely, an engineer-grade stop sign costs about $50-70 online. Does Public Works even care? Is anyone managing risk at City Hall? 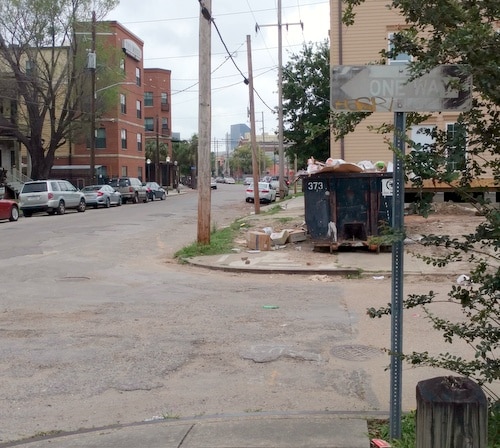 What passes for a “one way” sign at Robert C. Blakes and St. Mary. (photo by Owen Courreges for UptownMessenger.com)

This photo was taken at the intersection of Robert C. Blakes, Sr., Drive (formerly Carondelet Street) and St. Mary Street. Again, this is just a couple of blocks away from the previous photo. Here, the problem is that there is only a single, lone one-way sign, and it is faded almost to white, and is placed about a dozen feet back from the intersection where it is partially blocked by foliage.

There is no other “one-way” sign, there are no “do not enter” signs, and there is no stop sign for traffic coming from St. Mary. The danger imposed by this state of affairs should be obvious.

If somebody comes speeding down Robert C. Blakes and turns down St. Mary the wrong way due to the lack of proper signage, they may potentially be confronted by an oncoming vehicle that has not been alerted of the need to slow by a stop sign. That would surely be a magnificent collision, and it would be solely attributable to the city’s incompetence. How did this pass the city’s notice? 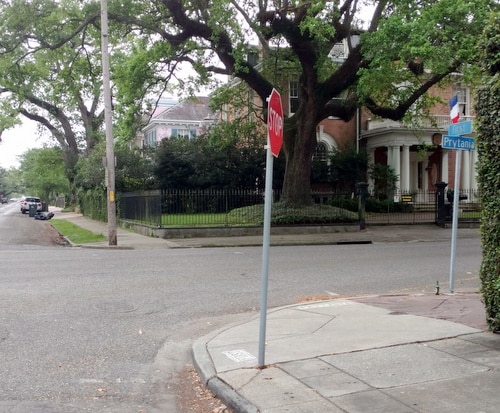 This stop sign near the McGehee School is looking the other direction. (photo by Owen Courreges for UptownMessenger.com)

Finally, this photograph was taken several blocks away at the intersection of First and Prytania Streets, from the lakeside of First Street. You’ll note that there is only one stop sign, and it has been turned away from the view of oncoming traffic to where it is barely visible.

If you think this is a minor quibble, consider this – this section of First Street runs directly alongside the Louise S. McGehee School. Children cross this street. Visitors to our city are generally not aware that Prytania is a major thoroughfare, and if they come down First Street from St. Charles and don’t yield, they may hit an SUV full of kids (or the kids themselves).

The city could have placed stop signs on both sides of First Street as a prophylactic, but they didn’t. Instead, they installed revenue-generating speed cameras on Prytania and apparently ignored signage entirely. Does this not show misplaced priorities?

After all, aren’t we about to spend $6 million repaving Bourbon Street? One wonders how many new street signs that could buy.

New Orleans does joke about being “third world,” but even many developing countries manage to maintain basic street signage in major cities. As a city we are not particularly wealthy, but we aren’t so poor that street signs should be conspicuously absent for months on end or traffic signals should be out for several weeks.

Based on my humble observations, something is getting worse. In New Orleans, that’s saying something.

29 thoughts on “Owen Courreges: Is New Orleans too broke to pay for stop signs? Or too lazy? Which is worse?”