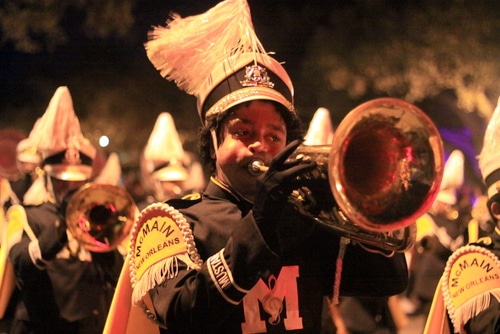 The Eleanor McMain band performs in the Krewe of Cleopatra parade in 2016. (Robert Morris, UptownMessenger.com)

Eleanor McMain Secondary School will become a charter school operated by the InspireNOLA network, but a decision on the future of Mahalia Jackson Elementary has been postponed for further discussion after the Orleans Parish School Board met Thursdsay night.

Meanwhile, the OPSB also approved the transfer of eight charter schools back to its governance from the Recovery School District — including Lafayette and Esperanza from the Choice Foundation, Samuel J. Green and three others operated by Firstline Schools, Harney and several others. The schools will still be run by their same charter operators, but will be overseen by the OPSB instead of the RSD.

For more information about the decisions, see the report from the OPSB below:

Earlier this evening, OPSB board members unanimously voted to approve the Superintendent’s recommendation to grant InspireNOLA permission for automatic replication of Edna Karr as a Type 3 Charter at Eleanor McMain Secondary School. As Edna Karr High School has been deemed a high-performing school, under state law and district policy it is eligible for automatic replication. InspireNOLA, as the operator of Karr, has requested permission to replicate as a Type 3 conversion of an existing public school. The board approved the recommendation for McMain. The replicated Type 3 contract for Eleanor McMain Secondary School will be for five years, and as a school in its initial charter term will be subject to the third-year extension provisions of state law and district policy.

“InspireNOLA’s operation of Eleanor McMain Secondary School represents an opportunity to build on the tradition and legacy of the school, which was envisioned as an intentionally diverse learning community from its initial expansion to serve high school grades during the 1970s,” said Lewis. “I’m dedicated to providing students with the best education possible and am excited to work with the community, faculty, students, and families to continue to foster the growth of such high achieving schools.”

Other highlights from the board meeting included the approval of the award to operate the Orleans Justice Center Educational program to the Center for Educational Excellence in Alternative Settings (CEEAS), a non-profit organization. The contract is not to exceed the amount of $975,000 per year for two years. CEEAS is the same non-profit vendor that currently operates the Travis Hill School at the Youth Studies Center. The approval will allow OPSB to run a full day education program for eligible students at the prison.

OPSB also adopted several resolutions to transfer oversight of eight schools to local control, a year ahead of the legal mandate, signifying another step towards reunification of city schools under OPSB oversight. Those schools are Esperanza Charter School and Lafayette Charter School of New Orleans operated by Choice Foundation, Sci Academy operated by Collegiate Academy, Arthur Ashe Charter School, Samuel J. Green Charter School, Langston Hughes Academy and Phyllis Wheatley Community School operated by First Line Schools, and Edgar P. Harney operated by Spirit of Excellence Academy. The Orleans Parish School Board’s oversight of each school will begin in the 2017-18 school year. Pursuant to the requirements of BESE Bulletin 129, §505, BESE will consider approval of this decision during its May meeting.

The board moved to defer the decision to close the district-operated K-6 school program at the Mahalia Jackson Elementary (MJE) school facility at the close of the 2017-2018 school year. Meetings scheduled for this Saturday April 22 and Tuesday April 25 for Mahalia Jackson families will be rescheduled to provide the school community, parents and staff the opportunity for additional input. The Superintendent looks forward to meeting with the school community. The meetings will be scheduled at a later date.

Lastly, the school board approved a calendar for the ensuing school year. The calendar reflects the days that schools will be in session, holidays, vacation periods, professional development days and the beginning and end of each marking period at elementary and secondary levels. The 2017-18 Academic Calendar provides 204 teacher days and 166 student days. The instructional time of 67,320 minutes exceeds the State minimum requirement of 63,720 instructional minutes. This is equivalent eight days of instructional time.