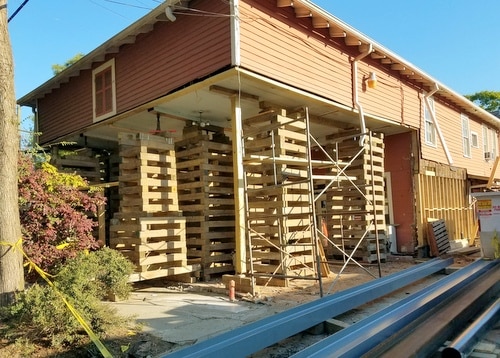 The Cafe Freret building, photographed in March, is receiving structural repairs as the owner looks for a new restaurant tenant. (Robert Morris, UptownMessenger.com)

The building that was home to Cafe Freret for 11 years until the end of 2015 is now undergoing structural renovations as its owner seeks a new restaurateur to take over the space.

Cafe Freret, a university-area grill and brunch spot on the corner of Lowerline Street with a large outdoor seating area and a following among dog owners, closed in late December 2015, according to a note on its Facebook page. 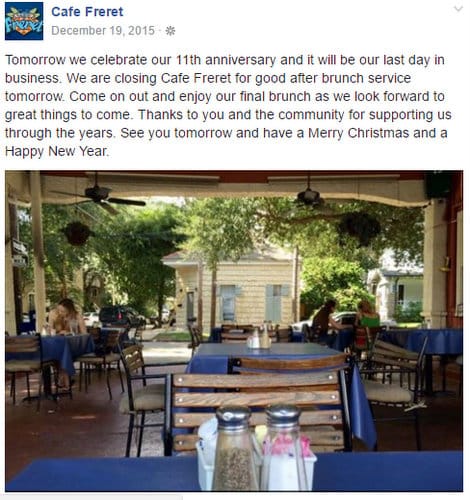 In January 2017, the owners of the building — Paul and Jody Ferchaud of Honolulu, Hawaii — received permits for $150,000 in structural renovations of the vacant building, to repair the foundation, the first-floor walls, and the second-story ceiling supports, according to documents filed with the city.

Jody Ferchaud — whose family has owned since at least the 1980s, according to online property records — said she hopes to find another restaurant to take the place of Cafe Freret when renovations are complete.

“The property is currently zoned for a specialty or full service restaurant,” Ferchaud said. “I hope to find a restaurateur who will embrace this great location.”

Jared Munster, director of the city’s Safety and Permits department, confirmed in a letter in March that the property retains its conditional use as a restaurant with the sale of alcohol. Munster declined, however, to offer any opinion on the status of any “good neighbor agreement” that may affect the property.