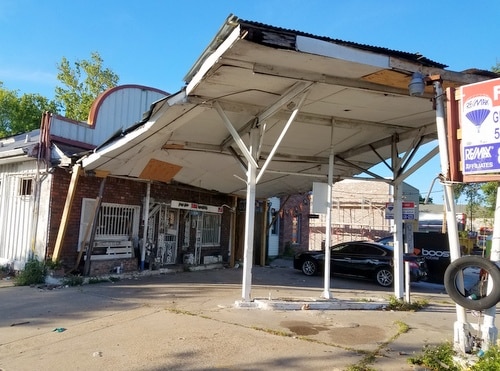 The building at 3200 South Carrollton Avenue was approved for demolition this week. (Robert Morris, UptownMessenger.com)

A former South Carrollton Avenue service station with a long distinctive overhang was approved for demolition this week, and the new owners plan to replace it with either a sports bar or a drive-through coffee shop.

The building at 3200 South Carrollton Avenue (at the corner of Oleander Street about a block off Earhart Boulevard) was owned by the Patterson family since the 1970s until it was sold to Evelyn Evans Freiberg for $200,000 in early March, according to documents included with the demolition application.

“We hope to build a sports bar there, though we also have been approached by a local coffee chain about leasing the property,” John Freiberg told the Neighborhood Conservation District Advisory Committee on Monday afternoon. “We would like to rebuild it because it is an old service station. It’s fairly dilapidated.”

Evelyn Freiberg said the coffee chain would also use a drive through at the location if that project comes to fruition. City records, however, show the location has submitted a request for a neighborhood meeting about a sports bar.

“I live in the neighborhood,” said commissioner Lee Bressler. “I vote for the coffeeshop.”

The old gas tanks remain in the ground but have been filled with concrete, and the demolition process will remove them, said Evelyn Freiberg. No benzene has been found in the soil, but Demo Diva will test the soil after the removal, and if any chemicals leaked, they will replace the affected soil and three feet around it, Evelyn Freiberg said.

The surface level is actually lower than the street, so part of the property also needs to be elevated, John Freiberg said.

The demolition request received a unanimous vote from the committee, though it does not specify any particular use for the property. The committee’s recommendation will next be forwarded to the City Council for final approval.

3 thoughts on “Former service station on Carrollton Avenue to be torn down, replaced with coffee shop or sports bar”