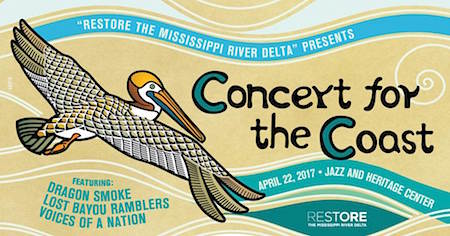 Restore the Mississippi River Delta, a coalition of several organizations, will present “Concert for the Coast” to help raise awareness about Louisiana’s coastal land loss crisis and the critical projects available to restore the coast.

Hosted by actor-comedian Harry Shearer and featuring local celebrities and musicians, Concert for the Coast will take place on Earth Day, Saturday, April 22, from 7 to 11 p.m. at Jazz and Heritage Center, 1225 North Rampart Street.

Without action, Louisiana could lose 2,250 square miles of land over the next 50 years, putting our communities and cultures at risk. Louisiana’s 2017 Coastal Master Plan is the blueprint for the state’s coastal restoration and protection efforts. If implemented, it will help Louisiana avoid this worst-case scenario and reduce damages, which could exceed $150 billion over the next 50 years without the master plan. In addition, nearly 60,000 jobs will be supported by investments in coastal restoration and protection over the next 10 years. The Louisiana Legislature will soon be considering the 2017 Coastal Master Plan. A recent poll found that an overwhelming 88 percent of Louisiana voters statewide want their legislator to vote for the plan.