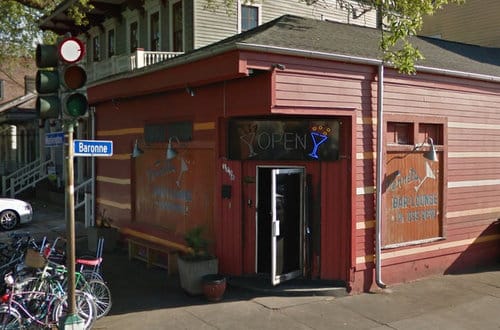 Verret’s Lounge at 1738 Washington Avenue, photographed in April 2016 (via Google) 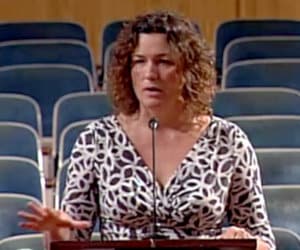 Joanne Close, shown in her presentation to the Alcohol Control Board last month, wants to buy Verret’s Lounge from its current owner. (via City of New Orleans)

Verret’s Lounge on Washington Avenue may be in line for a new proprietor with a new wine-oriented focus, but first its owners are asking the city to release the establishment from a requirement for a security guard put in place after a man was fatally shot inside the bar last year.

After the shooting, the city’s Alcohol Control Board imposed a requirement on the bar that it keep armed security from 9 p.m. until closing on weekend nights, as well as a functioning security camera system. In October, the bar asked the city to place an end date on the security-guard requirement, but officials declined at the time.

Last month, attorney and Verret’s owner Powell Miller returned to the board, asking again for release from the requirement, saying the shooting was tragic but did not result from any misconduct by the bar.

“It wasn’t like a bunch of trouble was going on in the bar and a fight broke out. There was one person in that bar who was hiding from a relative. That relative found him, walked into the bar and executed him,” Miller said during the Feb. 21 meeting. “It’s not that the bar was a bad actor and didn’t do anything it was supposed to. This was a horrible situation, but did not stem from the bar itself.”

The bar has had no security problems since then, and even the security company has told Miller that their presence seems unnecessary, he said. Further, he now has interest from Joanne Close in buying the bar (but not the building), bringing more expertise and direct attention to its operations — “on all fronts, just run a tighter ship,” Miller said.

Close and her husband would like to renovate the bar, and a third partner will manage it directly, she told the board. They don’t intend to serve food, but they will make wine a more prominent part of the drink menu, she said. It would be another transformation for the bar, which was known as the Turning Point and was a staple on second-line routes prior to becoming Verret’s in 2013.

“We think it has tremendous potential. It’s a great location,” Close said. “It’s going to primarily be a bar, but with more of a wine concept incorporated into it as well.”

The bar will probably change its hours to close earlier than the 3 a.m. closing time mandated by the city, she said. They will keep the cameras, and maybe hire their own security guard, but the burden of hiring an outside security company is prohibitive, she said.

“We don’t want to have a late-, late-night bar,” Close said. “It’s just not part of our business plan.”

The actual security requirement is only three days a week, so it should not be too onerous, rebuffed Assistant City Attorney Dan MacNamara. Further, the bar has not yet proven itself as safer than it was before the shooting.

“Very specifically, someone was murdered in this place,” MacNamara said. “Even going on right now, there’s a lack of direct supervision by the owner of the establishment. That certainly gives me pause.”

Close said she worries about the possibility of buying the bar, then some accident with the outside security guard — such as his not showing up on time — could result in the loss of her liquor license, rendering her unable to operate the business.

“The way that my lawyer sees it, you’d be purchasing a business that the liquor license is in jeopardy,” Close said. “I would like to have a consistent security person and develop a relationship with them. It’s a better business model.”

MacNamara said the board wouldn’t agree to such a harsh punishment for such an arbitrary situation as she described. He encouraged Miller and Close to proceed with the sale, then return with the request once a track record has been established.

“There’s no cloud whatsoever,” MacNamara said. “You do the right thing, and there’s not going to be a problem. There is no cloud.”

Alcohol board chair Nyka Scott suggested that she would like the mandates — which were signed last May — to be in place for a year before revisiting them. Board member Robert Jenkins suggested they could start that conversation a month sooner, however, so the board agreed to discuss the issue further at its April meeting.

“We certainly like to encourage good bar ownership. We don’t want to prevent any bars from operating,” Scott told Close. “But there was a shooting there, so we do take that quite seriously — not that it necessarily was your fault.”

8 thoughts on “With possible sale pending, Verret’s asks city again to be released from security-guard mandate”