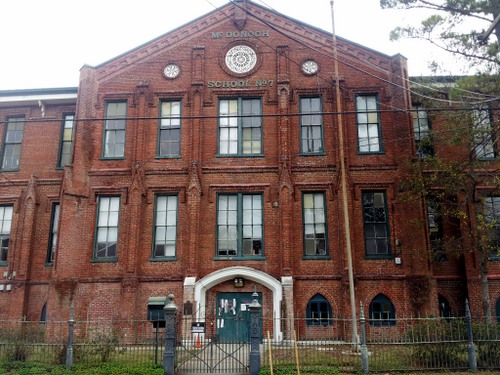 Teachers at Audubon Charter School are becoming increasingly frustrated with conditions at the school’s Milan Street campus, and have voiced numerous concerns over issues like cramped classrooms, faltering heating and cooling systems and broken playground equipment.

Those were the findings of a recent teacher survey conducted by the Audubon Charter School Parent Teacher Organization and presented last week to F.A.M.E., Inc., the board of directors that oversees the school.

“The complaints and concerns are becoming more and more often,” Mandy Lilly, president of the PTO, told board members on Saturday during a regular monthly meeting. “We’re being approached by faculty members about how the size of the Milan campus is affecting testing.”

Audubon Charter School moved its upper school campus, which included grades 4 through 8, from its location at the old Carrollton Courthouse to the former McDonough 7 campus at 1111 Milan Street in late 2013.

At the time, school officials touted that building as being “newly renovated.” Since then, teachers, board members, parents and even students have started complaining about the facility’s various defects.

Audubon officials have long considered the Milan Street campus their latest “temporary” facility, expressing interest in a permanent location at either the Allen building that houses Sci High on Loyola Avenue or the Banneker building near their main campus on Broadway Street when they become available. In the meantime, Lilly said teachers are hoping to find a more immediate solution for the middle school students.

Board member Eva Alito said she was sympathetic to the teachers, and had witnessed some of the building’s problems herself.

“We did improve the situation, and the solution is temporary. We moved from Carrollton, which was even more dilapidated,” Alito said. “But we shouldn’t stop until we have an adequate facility.”

The board president, Derek Bardell, said that a letter should go to Henderson Lewis, the superintendent of the Orleans Parish School Board.

Bardell also opted to hold the next board meeting at the Milan Street campus, because OPSB officials were expected to attend.

“They control a lot of this,” he said of OPSB.

Lilly responded that both teachers and students intended on sending letters. She also asked, however, that a committee be put together “as soon as possible” for officials to find a solution to the overcrowding as soon as next school year.

“Morale is low and something must be done now,” Lilly said, adding that school board members, faculty and parents all should think “creatively and outside of the box for solutions,” and not just rely on OPSB to problem-solve.

“It’s small,” one faculty member said about the campus. “We lack parking. We lack a general meeting place to hold all of us.”

Another teacher wrote in French that the building “is very loud, poorly insulation, and the cohabitation between the Middle School (which switches classes every hour) and the elementary is not easy.”

One respondent called the cafeteria “a cave.” Yet another said that Montessori methods — a technique the school uses to teach a large number of attending children — “cannot be applied in the current state of the facilities provided.”

Yet another faculty member took to the survey to complain air other grievances besides problems with the campus. The school in general is too top-heavy with administration, the respondent said, and there are too many students assigned to each individual class.

“The numbers do not agree with state recommendations,” the teacher wrote.

The board instructed Lilly to release the survey to Uptown Messenger after she presented it to them, despite her initial hesitation to share it with the media. The Louisiana Public Records Law defines public records as any written materials that come into the possession of a governing body, such as a charter school board, and require that they be made immediately available to any who requests them whenever possible.

The survey, which also included questions and answers about teacher grant programs and participation in school events, did not include the names of teachers or faculty members who made the comments.