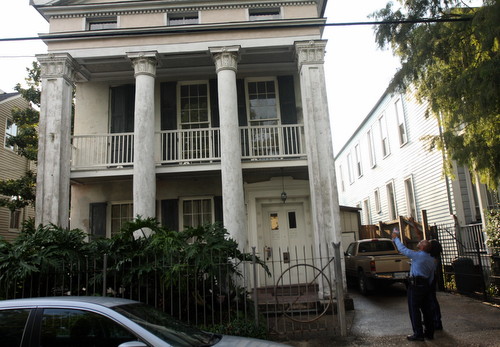 After neighbors’ research suggesting that a private patrol in the Lower Garden District would not be cost efficient, members of the Coliseum Square Association have opted instead to hold a raffle in order to raise funds for security cameras.

The goal is to raise $10,000 for the purchase of 40 cameras, which cost roughly $250 for equipment and installation. The neighborhood association plans to use equipment bought through Project NOLA, a city-wide network system that relies on individual residents to invest in crime cameras.

To raise the funds, the neighborhood association will sell 200 tickets at $100 each. The winner of the raffle will get $10,000, according to association board member Ryan Kropog, and the remainder of the money will go to the crime camera program.

“To me this made sense as far as asking people for money,” Kropog said. “You make it into something that would be desirable.”

Neighbors who opt to host the cameras will be on the hook for $10 a month, the maintenance fee charged by Project NOLA for being connected to the network.

If the raffle works, Kropog said, the association will hold more. He aims to have 120 cameras installed throughout the neighborhood.

In February, Kropog said he was still figuring out the logistics of hosting the raffle and deciding where the crime cameras would go.

The board voted to move forward on the project after Kropog presented a survey conducted in December. Of the 138 neighbors who responded, 88 percent said they thought security cameras would be effective.

About 71 percent said they liked the idea of the camera but were concerned about costs.

Although the board ultimately voted to hold the raffle, at least a few neighbors were concerned about the proposal.

Trenton Gauthier, another member of the Coliseum Square Association, said he had doubts about the reliability of the Project NOLA network, and mentioned investigative reports written about its founder, Bryan Lagarde. He voted against buying cameras from the company.

“He’s suspicious, because he’s also the distributor for the cameras,” Gauthier told Kropog. “ I think his pricing is out of whack.”

Kropog responded that the association decided to go with Lagarde’s company because it was the largest non-profit camera company.

“As far as other options I’d be open to them,” Kropog said, but then quickly added that the New Orleans Police Department relies heavily on Project NOLA cameras to solve crime.

Member Bettine Sackey told members she was anxious to have the cameras installed, and didn’t want to wait to find another company to host them.

“I want to move forward on this,” she told the board.

Kropog had suggested that a private organization patrol a swath of land with boundaries from St. Charles Avenue to Constance Street, and from Calliope Street to Jackson Avenue. The area would directly meet another privately patrolled swath of land, in the Garden District, at Jackson Avenue.

At roughly $438,000 a year, or $730 per parcel, members ultimately decided that patrol would be too costly, however.

Based on the city assessor’s website, Kropog in June calculated the roughly 600 parcels in the boundaries he outlined. He then based the cost of patrol on what the Garden District Security District charges, which is roughly $25 an hour per vehicle.

According to a crime and safety report issued by the neighborhood association, crime in the 6th District, which encompasses the Lower Garden District neighborhood, was up by 3 percent in 2016.

The most common crime reported was shoplifting, according to the report, but homicides were also up. The number of aggravated batteries, shootings and armed robberies were all decreasing.