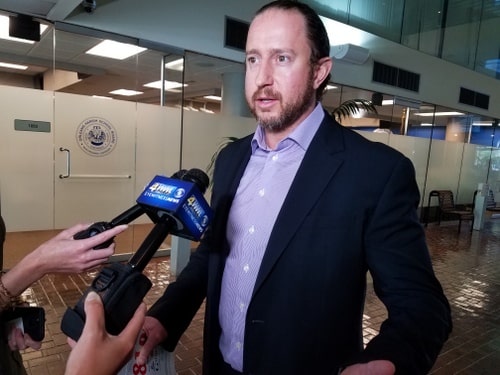 A Houston-based developer of senior living communities won the auction Thursday morning for the Carrollton Courthouse with a $4.7 million bid.

CEO Carl Mittendorff of Colonial Oaks Senior Living in Houston, Texas, placed the winning $4.7 million bid after a quick auction Thursday morning at the Orleans Parish School Board headquarters on the Westbank. Colonial Oaks’ closest projects so far have been in Lafayette, Louisiana, but the company has been exploring the New Orleans market for about three years prior to Thursday’s auction for the courthouse, which he called “the perfect site.”

“It’s gorgeous. It’s a beautiful building,” Mittendorff said afterward. “We want to preserve what’s there and restore it to a new day, and that’s exactly what we do.”

Built in 1855 by noted New Orleans architect Henry Howard, it spent only 19 years as a courthouse before the city of Carrollton was annexed by New Orleans. It then became McDonogh School No. 23 until 1950 — and, after a brief scare in which the A&P grocery chain wanted to demolish it for a new store — it became Benjamin Franklin High School, then an extension campus for Lusher and Audubon charter schools.

The building was deemed no longer habitable for a school in part because of its leaks and other weather damage related to deferred maintenance and in part because of the costs of a historic renovation, but Mittendorff said he was undaunted by its condition.

“We’ve got a great local team that specializes in preserving historic buildings and has a strong track record in the city of New Orleans doing just that,” Mittendorff said. “We know that we’ve got some challenges ahead and we’re excited about facing that with the right local partners.”

The developers don’t yet know how many people the site will house, but the project will involve the entire campus, Mittendorff said.

Mittendorff sat during the auction with local developer Tom Winingder, who has been involved in the new development on Magazine at Richard as well as the renovation of St. Anna’s in the Lower Garden District. Mittendorff described Winingder as a friend and said he did not know yet whether Winingder’s company would be involved in the redevelopment of the courthouse.

The second highest bidder was New Orleans-based developer Bernard Fromherz, with a bid of $4.6 million.

The courthouse has been the subject of numerous efforts for preservation for public use since Audubon Charter departed at the end of 2013. The National Trust for Historic Preservation included it on its 2015 list of America’s 11 Most Endangered Historic Places; Tulane architecture students used it as a case study for a number of potential uses; and individual activists such as Drew Ward and Edward Haik have tried to rally support for projects like a museum, a public market or a building trades school. None of those efforts, however, were able to come to fruition prior to Thursday’s auction.

The auction was preceded by detailed discussion of language in the title of the building specifying that the land be used as a school, which some observers had thought might stop the auction or prevent the courthouse from being redeveloped. Attorney Bill Aaron told the prospective bidders, however, that the Orleans Parish School Board believes that language is simply a description of the property rooted in the history of its transfer from the city of New Orleans in the 1950s, but not a restriction on its future ownership if the school system no longer needs it.

Specifically, the courts ordered the city to give “any properties that had been dedicated exclusively for school purposes” to the Orleans Parish School Board without requiring any payment, Aaron said, so the deed to the courthouse described it in that way.

“Our opinion has consistently been that that was a description of the property that was mandated to be transferred,” Aaron said. “It was not a restriction on the deed.”

Developer Jim MacPhaille — who bought the former LaSalle School under similar circumstances for renovation into condos and also serves on the Lycee Francais facilities committee — asked if the courthouse would have a clear title without that language. The legal work to clear the title for the LaSalle School was complicated and involved, MacPhaille said.

“Can I guarantee you that somebody in the future, some court, might not conclude otherwise? No, I’m not going to stand here and tell you that,” Aaron said. “But looking at the history of the property, and the fact that there is nothing in there that in my opinion would amount to a deed restriction, there should not be an impediment. If there was an impediment, you get your deposit back, so there’s no loss to be obtained regardless of the outcome.”

Among the first to bid on the building was John Cummings, who has received national acclaim for his renovation of the Whitney Plantation into a slavery museum. Cummings saw the site as an opportunity for upscale, low-density residential development.

“You could have had four magnificent homes with enough land for parking and a park right at Carrollton and St. Charles,” Cummings said. “I think it would have been a winner.”

Ultimately, Cummings said he was concerned that the title issue was more serious than school officials envision. With the ambiguity remaining in Aaron’s answers, Cummings said he decided to stop bidding above $3.6 million, instead of the $5.5 million he had originally planned.

“It really wasn’t clear you could do anything with the building other than a school,” Cummings said. “We did not get that cleared up. I withdrew from the bidding because it was not clear they could deliver that title.”

2 thoughts on “Carrollton Courthouse awarded to senior-living developer from Houston after $4.7M bid”