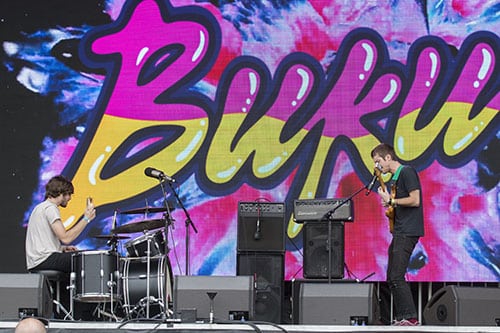 The 2017 Buku Music + Art Project came to a close on Saturday, March 11. The annual two-day festival, which takes place at Mardi Gras World on the banks of the Mississippi River, featured local, national, and international acts both large and small. 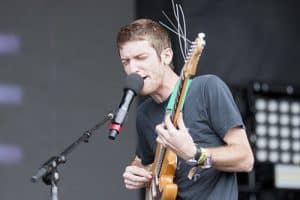 The festival hosted primarily electronic dance music (EDM) and hip-hop artists, but carved out a set for New Orleans-based rock duo Caddywhompus. According to guitarist Chris Rehm, they like sticking out amongst the other acts in a festival line-up.

“We like to have variety, different people coming out for different things. We’re all about doing new stuff and showing people new things, progressing musically,” Rehm said. “So the less you know, the better. The less familiar you are, the better.” 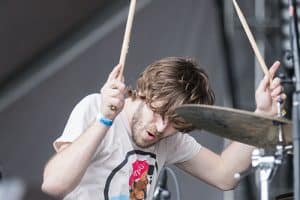 Caddywhompus was the first act on the second day of the festival, performing on the biggest stage, the Power Plant. The stage is in the shadow of an abandoned building with two large smokestacks.

Drummer Sean Hart, years ago, thought Buku’s current location would be prime territory for a festival.

“My friend had a faux wedding up there with his girlfriend. They got married and there were flowers,” Hart said. “I remember thinking ‘Man, we got to have a show up here’ and now we have it on lock down.’ ”

Buku also gave a stage to young, up-and-coming artists like rapper Kaiydo. The 20-year-old from Orlando, FL played a 30-minute set on the Ballroom stage. 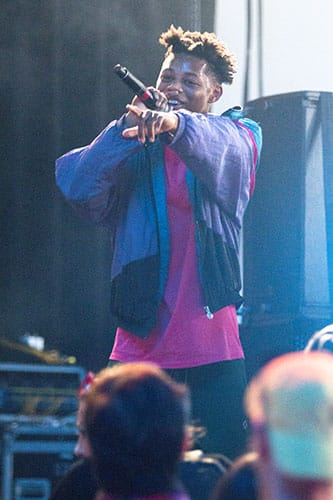 Kaiydo performs in the Ballroom during the first day of the 2017 Buku Music + Art Project. (Zach Brien, UptownMessenger.com)

Kaiydo was satisfied with the reaction of the crowd during his set, especially since he is not a well-known artist. “It was dope. I could tell a lot of people had never heard the music before, so to see people still vibing, it was dope,” he said.

Kaiydo has been influenced by New Orleans music from a young age, namely the city’s hip-hop scene.

Kaiydo had the opportunity to open for another New Orleans hip-hop icon, Mystikal, formerly of No Limit Records.

Kaiydo is currently on tour, but he hopes to return to Buku in the future. “I’d like to see myself back here [at Buku] playing a later show. Trying to continue to progress and have fun and live life,” he said.

New Orleans-based electronic artist AF the Naysayer played an hour and 15 minute set at the Back Alley stage on the second day of Buku. He was excited to play Buku Fest because it is timed well with the trajectory of his musical career. “It makes more sense now for what’s happening in my career. I’m getting more popular,” he said. 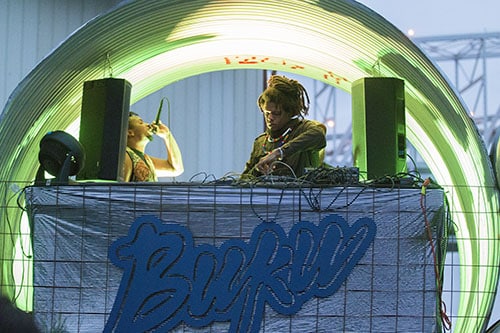 AF the Naysayer performs on the Back Alley stage at the 2017 Buku Music + Art Project. (Zach Brien, UptownMessenger.com)

AF is passionate about boom bap hip-hop music, but is looking to expand his sound.

“Wave Racer sound, the future bass sound is something I’ve really been listening to more of, more pop and R&B, trying to bring more of that into my sound,” he said. “My love is boom bap hip-hop, DJ Premiere, J. Dilla. That’s like my love, but I’m trying to push away from that and get a little uncomfortable, try to make new strides in music.”

New Orleans is a city rich with musical talent. With new people coming to the city and new musicians growing within the local scene, he finds influences all around him in New Orleans.

“There are so many great musicians here. The fact that people like Dominic Minix, Xavier Molina, his whole band [Yung Vul] and just like random people I run into,” AF said.