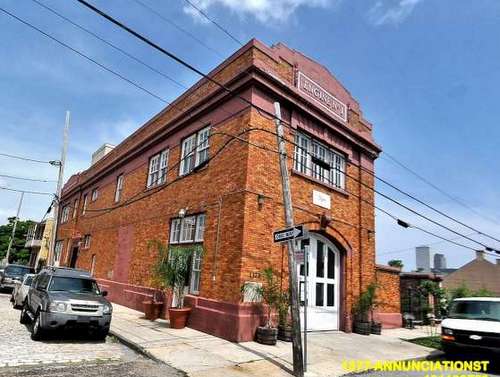 The former firehouse at Annunciation and Terpsichore is proposed to become the “Gris Gris Social Club.” (image via City of New Orleans)

Since he first discovered how New Orleans’ social aid and pleasure clubs exist in the city through zoning laws six years ago, Uptown resident and documentary film maker Trent Robinson has been trying to figure out how to create one of his own.

He may finally have his chance, he told members of the Coliseum Square Association on Monday night. He’s applied for a license to run the newly-envisioned Gris Gris Social Club out of an old firehouse, located on 907 Terpsichore Street in the Lower Garden District.

At a regular neighborhood meeting, Robinson invited all of the association’s members and nearby neighbors to be members of the club, for about $1400 a year, or for fees that could be paid on a per-day basis.

He may not have as many takers on the offer as he thought, however. To his apparent surprise, Robinson on Monday received pushback from several neighbors who said they were concerned about several aspects of the kind of social club proposed, including options for late-night live music, “day passes” for non-members and fees associated with the club.

Since it fell out of use as a firehouse, the building was for a while the highly-regarded restaurant Dijon, a particular favorite of City Councilwoman LaToya Cantrell’s. After Dijon closed, however, the building was briefly home to a venue called “Club Ra” in 2015 that hosted late-night parties that alarmed neighbors and drew the ire of city officials.

The land is currently zoned as conditional use, a land use allowed to operate as something different if the design is approved by a review process through the city, in an historic urban neighborhood business district, according to city documents.

The non-residential districts of those historic neighborhoods address “small-scale” commercial areas such as the traditional corner store or other “pedestrian-oriented” commercial clusters at street intersections.

“The regulations are intended to control the types of uses allowed and the scale of development to encourage their vitality while maintaining compatibility with nearby residential areas,” the New Orleans Comprehensive Zoning Ordinance, or the law that governs land use throughout the city.

Robinson, who graduated from Tulane University and now lives in the Garden District, said he is still waiting for Safety and Permits to grant him the zoning needed for his property to become a social aid and pleasure club.

A search through city records shows that a business license was approved for the third floor of the building, where Robinson said he would put his office.

In the meantime, he said, he’s rented the fire house and three adjacent properties for his proposed venture. Among other benefits, his members would have access to a restaurant that would serve breakfasts and lunches, live music in the evening and perhaps even cooking classes.

Members would also have access to a bar, a pool table, televisions for watching sports and perhaps even a community garden or parking, Robinson said.

Robinson also envisioned an educational aspect to his club, where would encourage “interaction” between students at the New Orleans Center for Creative Arts and members. He said he imagines arts, culinary arts and music classes.

Members might also have the option to rent the club out for special events, he said.

“It would have things to derive pleasure from the club’s members,” Robinson said. “Mostly it will be there as a place to provide community, have fun and interact with others.”

While the club would exist for the purpose of bringing artists and people who enjoy the arts together, Robinson told Lower Garden District neighbors that “anybody could become a member.”

Some residents at the meeting objected to Robinson’s definition of what a social club is, pointing out the history of how the institutions generally interact with its members.

The tradition dates back to the late 19th century, when benevolent societies existed largely for African Americans who had recently become emancipated. There were also faith-based clubs and fraternal clubs.

Many benevolent societies would work to give something back to its members or the community. Often, newly freed black men would get health or funeral insurance, which allowed them care when they were sick or a proper burial if they died. Hence the rise of second lines.

The cost of the clubs varies widely, too, from as little as $20 a month to more than a thousand a year.

While Robinson said he is still working with the mayor’s office on securing the permit need to run the club, he said he would be willing to sign a good neighbor agreement with the Coliseum Square Association to ensure that he maintains security, closes at an agreed-upon time and does his best to mitigate garbage.

Still, many members said they wanted a more detailed presentation on exactly what the club’s bylaws would be and where it is in the permitting process before giving their blessing for the proposed institution.

“I’m willing to give him the benefit of the doubt,” Bertel said. “But he needs to have a clear plan.”

Banks McClintock, who along with Bertel lives next to the proposed development, agrees. He also said that the development being proposed sounded more like a bar or music club than a members-only establishment that would occasionally provide live music.

“I think everyone would like to see something cool there,” McClintock said. “But right now I just don’t know what his club is.”