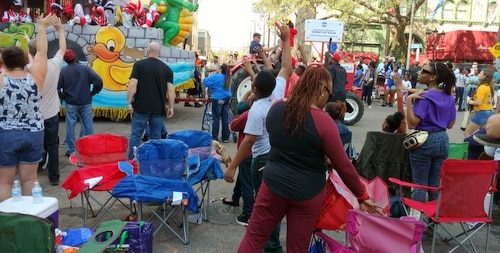 Empty portable chairs block an intersection as a parade rolls on Sunday, which is against the law and also just rude. (Photo by Owen Courreges for UptownMessenger.com)

Mardi Gras season has generally been considered a prime time for breaking the rules. Whatever terrible activities your nefarious mind has contemplated, Carnival can accommodate.

Drink to excess? Do it during Mardi Gras!

Dress up in a ridiculous, profane costume? If it’s Mardi Gras, I’m there!

Perform an obscene gesture towards a priest? Well, that’s awful specific, but I suppose it’ll fly during Mardi Gras!

Yes, Mardi Gras is a veritable panoply of questionable decision-making. However, there are still some rules that you shouldn’t be breaking. I don’t want to be dubbed Richard Von Killjoy, but suffice to say that Mardi Gras might need some additional regimentation to ensure a safe and healthy experience for all involved.

Thus, without further ado, here are a few pointers for those seeking not to be total jerks while we celebrate the most important day in the New Orleans calendar:

On the first day of Uptown parades, I ventured forth through the rain to seek my portion of inundated, plastic beads. After leaving my house, I began to cross Prytania Street at the intersection when I noticed a Mercedes SUV approaching in the far lane.

The driver then slammed on her brakes, skidding to a halt. She honked, and then rolled down her window, irately yelling at me “THERE ISN’T A CROSSWALK!”

I screeched back with some choice profanity, but the gist of my response was that all intersections have crosswalks as a matter of law. And I was right. Louisiana does not distinguish between marked and unmarked crosswalks; wherever there are intersecting sidewalks, there is a crosswalk, and pedestrians have right-of-way. Cars have to yield.

Thus, my first nugget of wisdom is to treat pedestrians with kid gloves. Not only are they more vulnerable, but they also receive legal priority, at least when they cross at an intersection.

The second day of Uptown parades, I again spread my proverbial wings and waded into the seething throngs of humanity that populated St. Charles. Alas, I was greeted by a veritable wall of portable chairs blocking the intersection.

Municipal law provides that all chairs, ladders, and other similar personal effects are not permitted in any intersection. This makes sense, because occasionally an emergency vehicle will have to cross the parade route, and seconds count. You wouldn’t want to force your ambulance to wait for some drunken yat to wobble over and push a row of chairs out of the way, would you?

It’s also just rude. The parades are not designed for sitting. They’re interactive. Thus, the law not only requires that chairs, ladders, etc., not be placed in intersections – it also requires that they be placed six feet back from the curb everywhere else.

The goal is to provide plenty of space for standing parade goers (i.e., people who actually get the point). Sitting isn’t forbidden, of course, but it can’t displace everyone else.

This is, perhaps, the most difficult rule for many people to remember. So many people visiting New Orleans suffer from the regrettable misconception that they can stake out a location in advance of a Mardi Gras parade, and then exclude any unauthorized persons from said location.

However, the places where people view parades are streets and sidewalks, i.e., public rights-of-way. You can’t claim “dibs” over them. Everybody has equal access. You can only claim a space with your physical presence.

I understand that many people make a particular effort to get out early and set up a viewing spot, but those of us who live near the route aren’t obligated to defer to nonsensical claims of ownership. If we get in “your space,” you just need to accept it. There’s no point in arguing about it.

These are only three pointers to bear in mind during Mardi Gras, but the bottom line is simple — follow the rules, and everybody will have a good time. Disobey the rules, and perhaps it won’t go so well.

6 thoughts on “Owen Courreges: Three easy ways not to screw up Mardi Gras for everyone else”