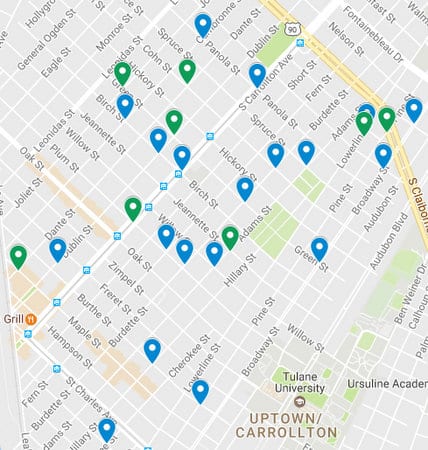 A sampling of locations around the Carrollton area where residents complained via social media about hearing loud booms on Dec. 1 (in green) and on Dec. 6 (in blue). (map by UptownMessenger.com via Google)

In early December, weeks before New Year’s fireworks could be considered a culprit, a pair of massive nighttime explosion sounds rattled homes and startled residents across the Carrollton area.

The noise was loud enough that it sent New Orleans police officers searching for gunshot victims, but they turned up nothing — and a survey of other public agencies since then likewise leaves the source of the sounds a mystery.

The first of the loud sounds to draw widespread attention on social media was a Thursday night, Dec. 1, around 11:45 p.m. Residents heard it across the entire Carrollton area from St. Charles Avenue to South Claiborne, between Joliet and Pine, and many said it sounded like it came from the river, with sirens following.

“It was louder than I’m used to hearing a transformer sound and it seemed to reverberate for a bit,” a woman who lives near Cohn and Dante posted on the Nextdoor social media network. “Really strange.”

“It was extremely loud! And deeper sounding than the gunshots I’m (sadly) used to hearing,” a resident at Panola and Cambronne replied.

The sound repeated itself again the night of Tuesday, Dec. 6, around 7 p.m. — early enough that it attracted even wider attention. In that second case, a number of residents reported that their homes shook, and some even said they thought they saw a corresponding red flash in the sky.

Once again, the Nextdoor social media network lit up with neighbors asking one another what could have happened, or merely confirming that such a sudden unexplained event wasn’t their imaginations. One resident even noted that both the sounds and the flash in the sky were recorded on his security cameras.

“I was siting on my porch at the time,” said a Spruce Street resident. “Saw a bright, big red light and then an extremely loud boom noise. My boyfriend said I looked genuinely terrified.”

“Our house at Carrollton and Panola Street shook too,” wrote a resident immediately after the Dec. 6 event. “Thought someone ran into our house with a truck. Strange event!”

Nightwatch officers in the NOPD Second District heard the sounds, too, and received calls about houses being shook by it. The officers who responded could not find any gunshot victims, however, or any other likely source, said Commander Shaun Ferguson.

“They did not find anything,” Ferguson said. “No one had a clear explanation.”

Many residents speculated that the sound might have come from the river, but officials with the Port of New Orleans said they had no records of any activity that could have caused such a loud sound.

“Our Harbor Police Department recorded no noise complaints for the entire month of December,” said Michelle Ganon, vice president for public affairs at the Port of New Orleans.

One other popular theory explaining the sounds was the possibility of activity from a jet overhead, perhaps linked to training exercises at the Naval Reserve Station in Belle Chasse. Officials at that institution did not return repeated calls or emails for comment about the incident, however — so for now, it may remain one final mystery that remains in 2016.