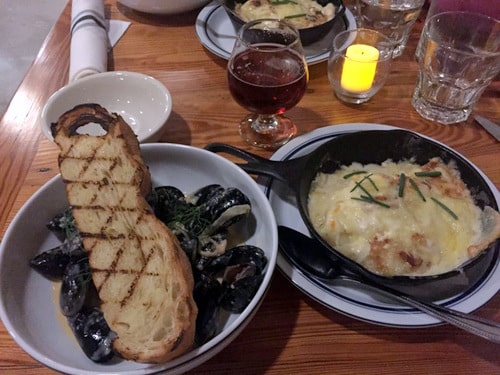 The steamed mussels on the small plate menu paired with Lagunitas Brown Shugga’ and a side of potato and turnip gratin. (Photo by Dannielle Garcia)

While the Freret Beer Room’s primary focus is all in its name, the new restaurant’s 16 craft beers on tap are also meant to be paired with a full lunch and dinner menu from a chef who’s served in some of the city’s most celebrated restaurants.

“We aim to marry good food and good beer,” owner Eli Gay said. “We’re sort of presenting beer in a way that you would see wine at most restaurants.”

Gay grew up not too far from the area and decided to move back to New Orleans. His previous experience working in a craft beer bar in New York City led him to the idea of the Freret Beer Room.

“I was going to open up a beer bar with some grilled cheese sandwiches and take it easy but then I started remembering that this is New Orleans and food culture is important here,” Gay said.

He bought the small spot which was abandoned after Hurricane Katrina and began renovating it in late July into a sleek restaurant with tasty craft beer.

After one single ad for a chef and many food tastings – and he’s not complaining about the temporary chefs – he finally chose “the one,” — Chef Charles Vincent.

“I gave him some beers to pair food with so that was the interview process. He’s not a beer expert but he’s a flavor expert,” Gay said.

Vincent, formerly a chef at Le Petite Grocery and Peche Seafood Grille, put together a menu with a variety of options, from a potato and turnip gratin layered with gruyere to steamed mussels drenched in a tomato oyster aioli, that complement the brews. There are small plates and entrée plates available.

“The way my food goes is I get beautiful ingredients in, then treat them well, cook them right and season them good and they do the work,” Vincent said.

Although the restaurant has only been open since the end of November, locals are already enjoying the addition.

“I’m excited to have this bar in the neighborhood. I wasn’t expecting a beer bar to have a full menu and was pleasantly surprised that the food was so good,” said Luis Zervigon, who lives in the area.

Whether you’re a beer connoisseur or a college student looking for a new spot, Gay said he hopes the Freret Beer Room will be a fun environment that provides quality service and good beers paired with delicious food. Visit freretbeerroom.com for a full menu. Hours are Mondays, Wednesdays and Thursdays from 4-10 p.m., Fridays and Saturdays from 11 a.m. to midnight and Sundays from 11 a.m. to 10 p.m.