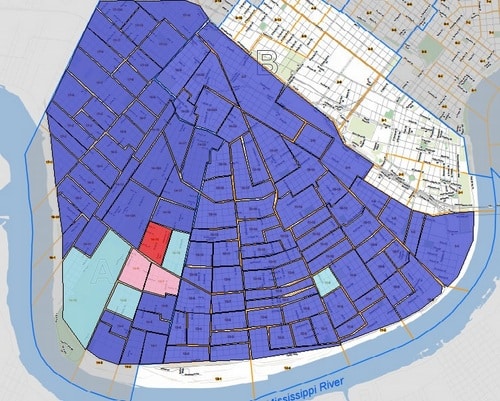 Trump won only three Uptown precincts clustered around the intersection of State Street and St. Charles Avenue. Of those, he won two by razor-thin margins, 47 percent to Clinton’s 45 percent, an actual lead of five votes in one precinct and seven votes in the other. Only in Precinct 14-14 did Trump’s margin over Clinton exceed 10 percentage points, where he won 150 votes to her 120.

By contrast, of the remaining 110 Uptown precincts, Clinton won only four by less than 10 percentage points. She won 77 percent of votes cast in Uptown precincts overall to Trump’s 17 percent, with some wards giving Clinton in excess of 80 percent of the vote.

At the polling place at the fire station on Magazine Street — where residents of the Irish Channel and Garden District cast ballots — many voters were more vocal in their opposition to Trump than they were in support for Clinton. Attorney Cliff Olsen said he had personally met Trump on two occasions, and came away disgusted both times.

“The man’s a lunatic,” Olsen said. “He’s a sociopath. You think he’s going to play ball with the Republicans? Hell, no.”

Mydia Casimier, who brought her daughter Destiny to the polls with her, said she recalled a stronger economy under President Bill Clinton, and felt Hillary Clinton’s career as a Senator and Secretary of State qualified her to be President.

“She’s a better candidate, and more experienced versus the Trump guy,” Casimier said. “He’s very arrogant, and his attitude is horrible.”

Voter Jeanie Sherlock described herself as an enthusiastic Clinton supporter, but was also repulsed by Trump — dating back to his demolition of highly-regarded architecture to build Trump Tower, which Sherlock called “an ostentatious piece of crap.”

John Ross Thomas said he started the Presidential election as a supporter of Bernie Sanders, but shifted without hesitation to support for Clinton once the Democratic primary ended — primarily based on the party’s support for LGBT issues.

“I could never imagine voting for somebody like Trump,” Thomas said. “If Trump was to win, I would have to live in a constant state of fear. That’s not a world anybody should have to live in. We’ve come so far — I don’t want to go back.”

At Eleanor McMain High School — the polling place for voters in Broadmoor and part of the Audubon-university area — a wider range of opinions on the election was easier to find.

One man, a banker, said he was voting Trump in hopes of seeing the Dodd-Frank financial regulations and Obamacare rolled back, and another man said he “held [his] nose” to vote for Trump over Clinton, even though he would have preferred the Republican Party find a better leader. Neither man would share his name, however, and both said they believed Clinton would win.

Voter Hollis Manuel, too, said she chose Trump — but solely in opposition to Clinton’s outspoken support for abortion.

“I don’t like him at all,” Manuel said. “I’m only voting for him because of the abortion thing. I don’t stand with him at all.”

Opposition to abortion was a motivating factor for voter Katie Heitmann, also, but she chose a different path — independent conservative Evan McMullin, who launched his bid for the Presidency simply as a protest to Trump’s Republican nomination.

“I couldn’t see myself voting in good conscience for Trump or Clinton,” Heitmann said. “Part of it is Trump’s stance on immigration, and his lack of respect for women got him on my bad side. But Clinton, there’s the general distrust, and I am very pro-life. Neither candidate hit the mark on my most important issues.”

Precinct 14-17, the Audubon precinct that votes at McMain, turned out to have one of the highest tallies of third-party votes in the Uptown area. Former Gov. Gary Johnson, the Libertarian, drew 7.9 percent, Green party nominee Jill Stein won 3.7 percent, and other candidates drew another percentage point from Trump and Clinton.

One man, who didn’t give his name, dashed in and out of McMain solely to vote in the Presidential election “for somebody not named Trump or Clinton,” he said. After glancing over the ballot, he chose the candidate from the little-known Constitution Party.

Voter Stephen Coburn said he chose Johnson in hopes the third parties would “shake up the status quo.” Republicans win by marginalizing minorities, while Democrats punish people who try to support themselves, Coburn said — and Trump and Clinton were both bad examples.

“I think they’re both bad people, for different reasons, of course,” Coburn said. “One is a corrupt individual, and the other is a bigot and a fascist.”

As around the rest of Uptown and New Orleans, however, Clinton voters were the easiest to find at the Broadmoor polling place — if not, as would be revealed later in the night, in unexpected battleground states of Wisconsin and Michigan. As the sun set, Bette and Ken Kussmann walked hand-in-hand out of the art deco cafeteria at McMain, firm in their support of Hillary Clinton.

“I just like her stances,” Bette Kussmann said. “And, unlike my husband, I trust her.”

“But I voted for her, because she’s qualified,” Ken Kussman interjected. “I think she’s made her own trouble, but she’s definitely better than the alternative.”