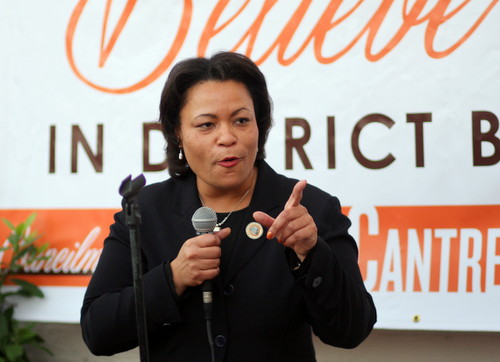 City Councilwoman LaToya Cantrell — long considered one of the most likely top contenders as a candidate for New Orleans’ next mayor — announced to supporters last week that she is indeed considering a run for the position.

Cantrell became heavily involved in post-Katrina politics in New Orleans through her leadership of the Broadmoor Improvement Association, and was elected to the open District B City Council seat vacated by Stacy Head’s election to an at-large position in a hard-fought four-way race in 2012. In 2013, Cantrell was re-elected to a full term in the seat without opposition — the only member of the City Council who did not draw a challenger that cycle.

Speculation about a potential mayoral run has long surrounded Cantrell, notably when Politico Magazine profiled her in April 2015 with the headline, “LaToya Cantrell, Madame Mayor?” As the potential field for next fall’s election begins to materialize, however, Cantrell emailed her supporters last week to confirm that she is “considering” running for mayor.

You have known me as your District B New Orleans City Councilperson for four years and before that as a leader during the recovery in Broadmoor. It has been an honor to serve you and work alongside you, so it’s important to me to tell you what’s in my heart.

I know it seems early to talk about the October 2017 municipal elections. We all feel burned out by the long and divisive presidential campaign. But for me, Tuesday’s results confirm that we need to build together from the grassroots without delay. We need leadership – here and in cities across the country – committed to the inclusive values on which our nation was founded.

That’s why I hear the call to serve and lead this wonderful city that is our home. I am considering running for Mayor of New Orleans. But before I make the final decision to get into the race, I need to know that you will be with me.

We are a city united by a rich culture and extraordinary creativity-a diverse, multi-layered tapestry of people and neighborhoods. We have made a unique contribution to the world. And we should be proud of the fact that we come together, neighbors helping neighbors. Together, there is no challenge we cannot overcome.

New Orleans is a city with two truths. The first truth is that we are a rapidly growing city where the average income is rising and new businesses are flourishing. New construction is filling the CBD and many of our public schools, recreation centers and libraries have been beautifully rebuilt.

But there’s another truth. It’s one the guidebooks don’t describe, but we all know it. This truth tells of persistent crime, pockets of blight, and streets that flood far too often and are sometimes impassable with potholes. It’s a place where many opportunities are out of reach, and too many people don’t make enough money to support their families.

The path forward for New Orleans – and my goal if I’m elected Mayor – is to build on our combined strengths and determination to make the first truth a reality for all New Orleanians.